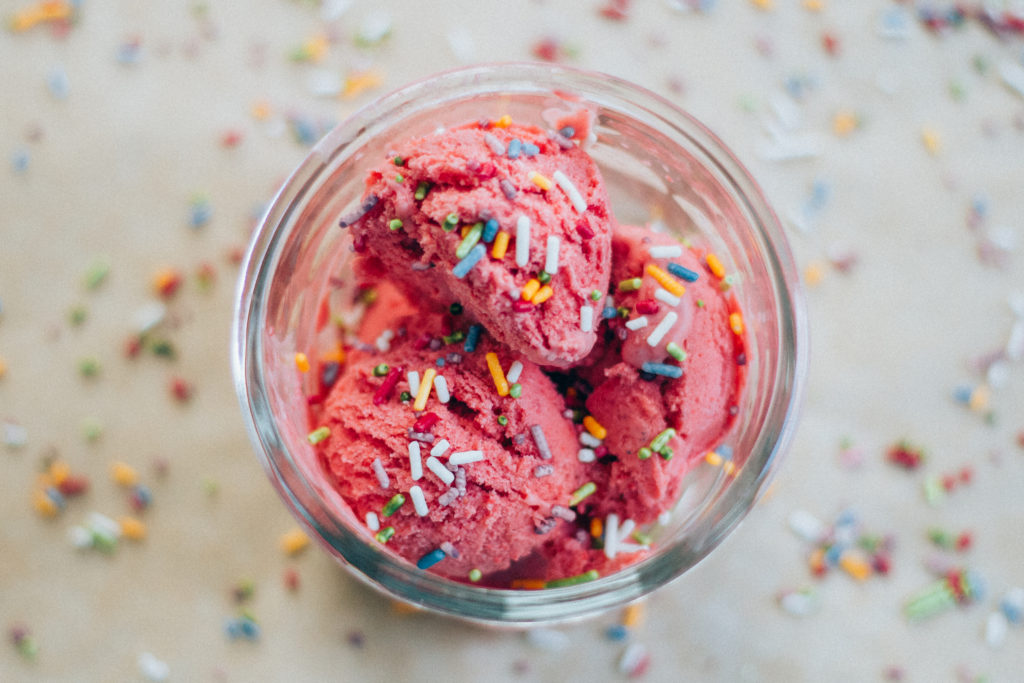 Hello from Connecticut, everyone! I’ve just gotten back from a few days vacation in Colorado, and I’m seriously missing the mile-high vibes. Denver was the coolest (much cooler than my capital city, by the way), and the surrounding areas we visited were absolutely stunning. I’m going to write a post about ColoRADo (see what I did there) in a little while, but first I just HAVE to share this ice cream recipe with all of you! 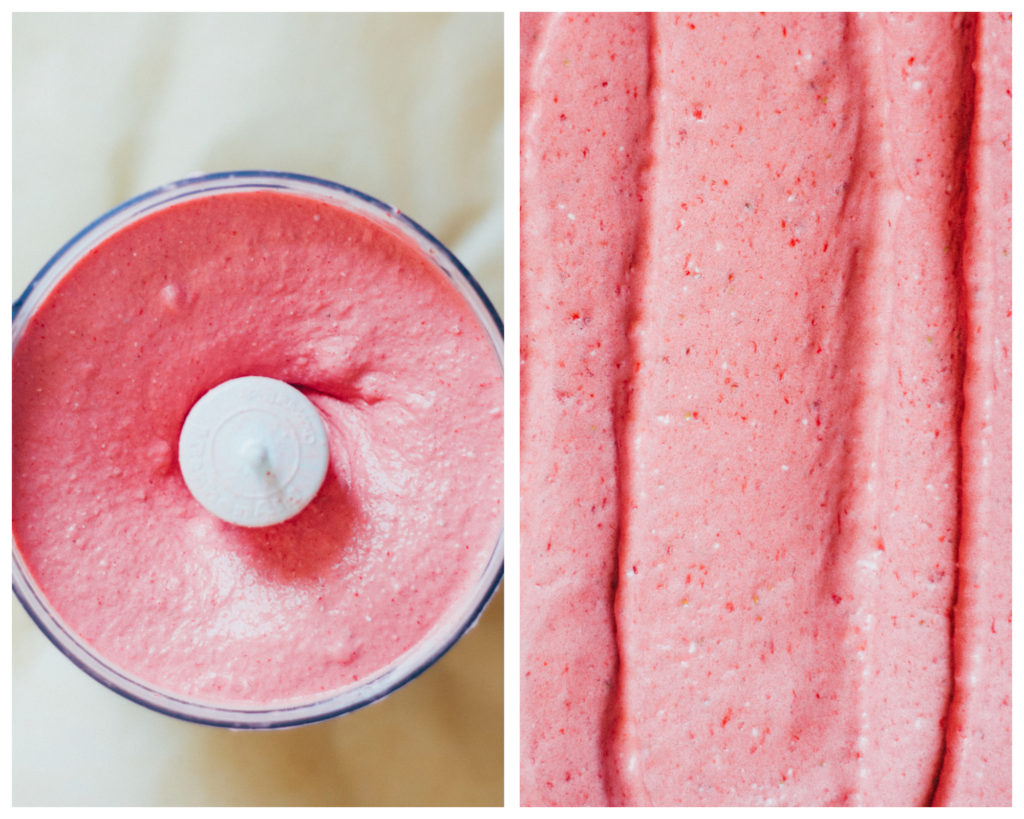 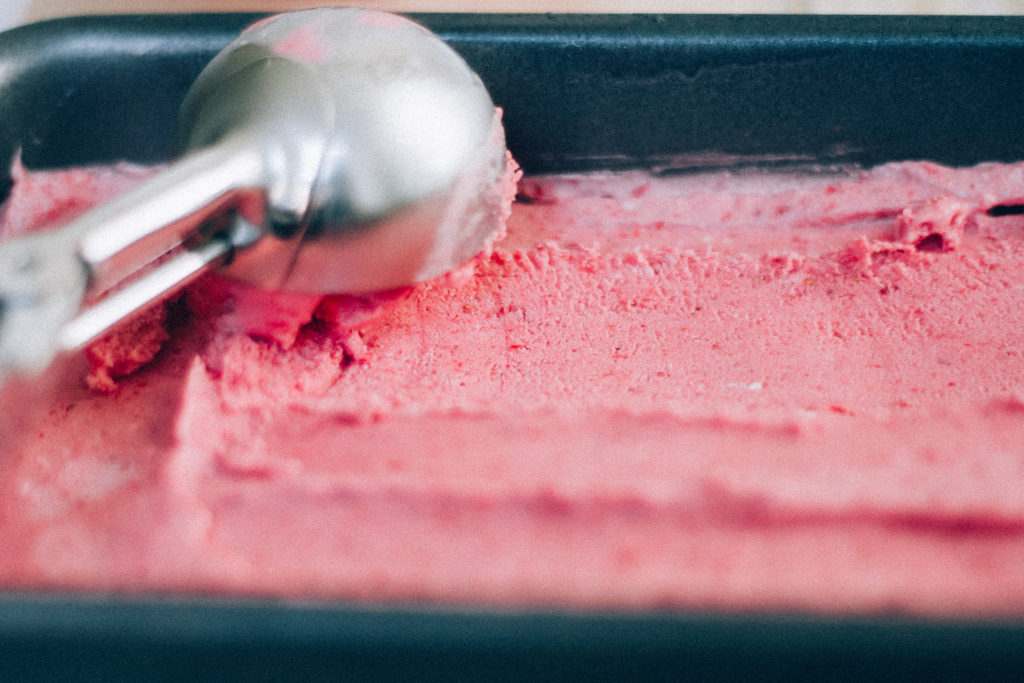 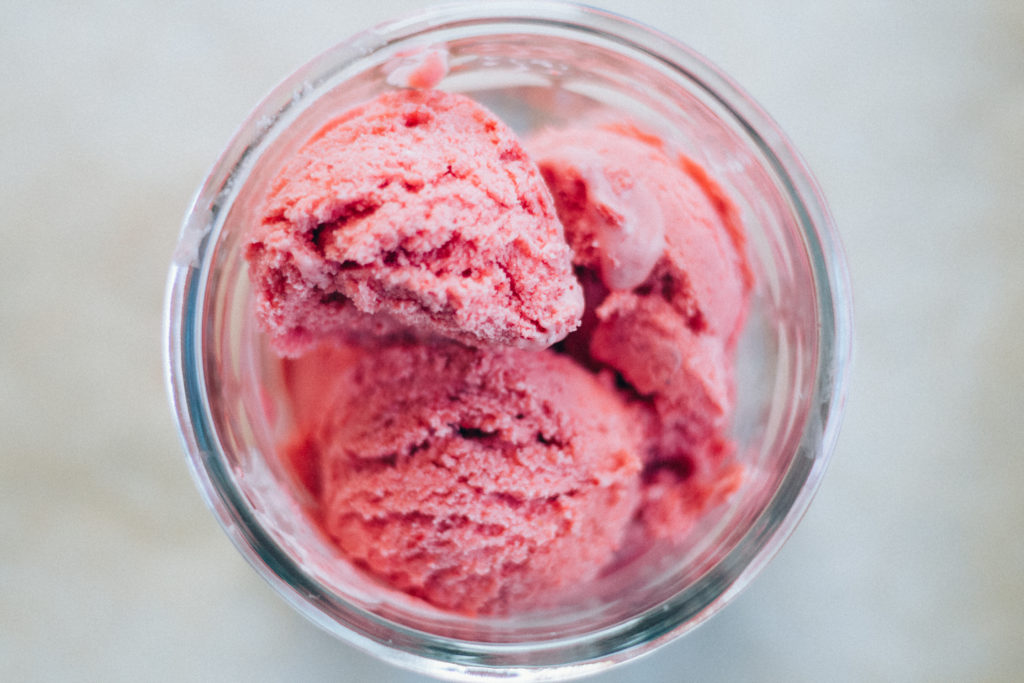 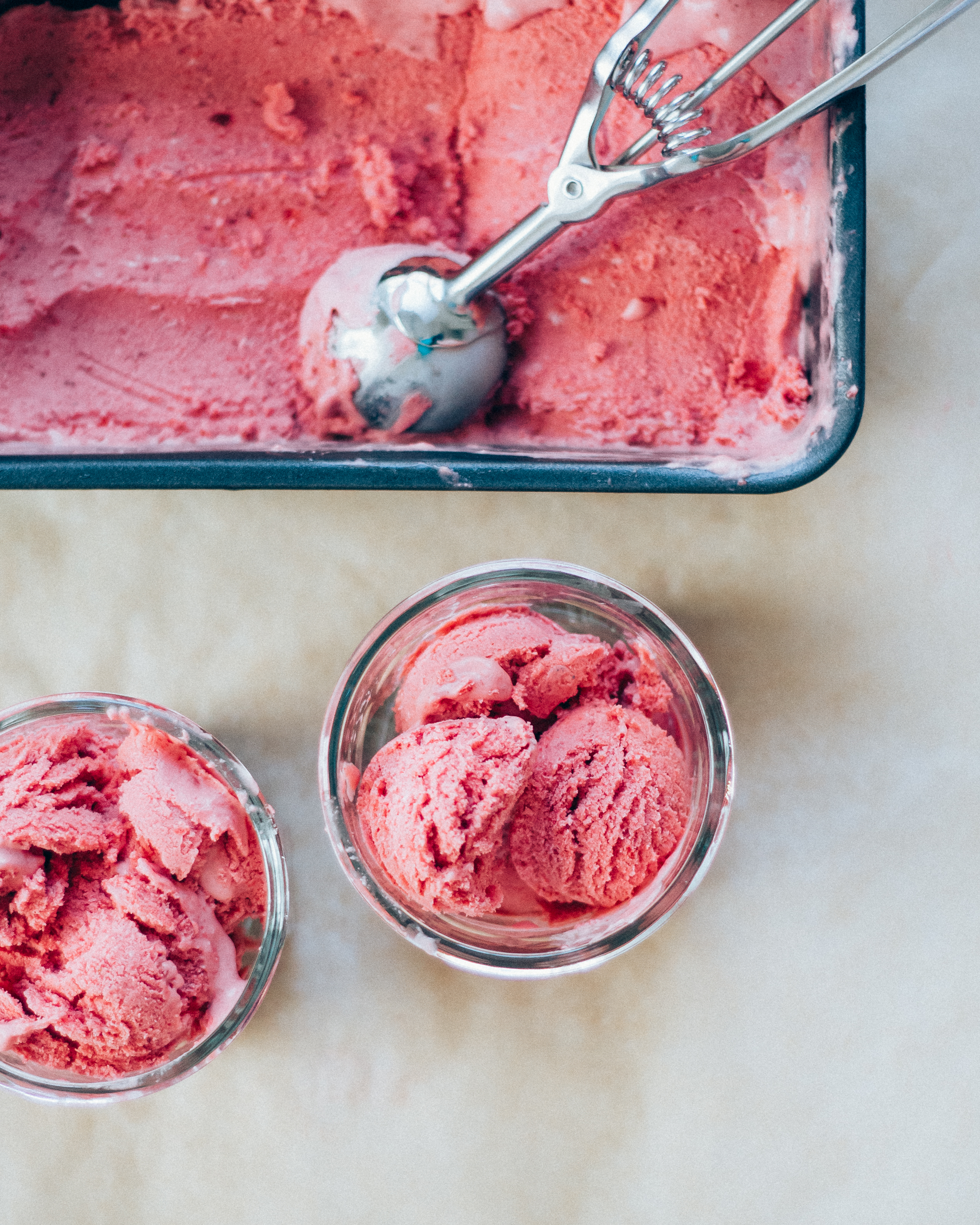 Lately, I’ve been seeing all of these amazing ice cream recipes online (like this one and this one). But they all seemed to require one of the following things:

1// Ingredients I don’t have

3// Time to stir the ice cream at various intervals, which I don’t have

I was having quite a conundrum. As much as I would love to have a ton of medjool dates on hand / an ice cream maker / TIME to make ice cream, I have to be realistic about my summer-dessert-endeavors. So I started thinking of ways I could make ice cream in the most minimalistic way. 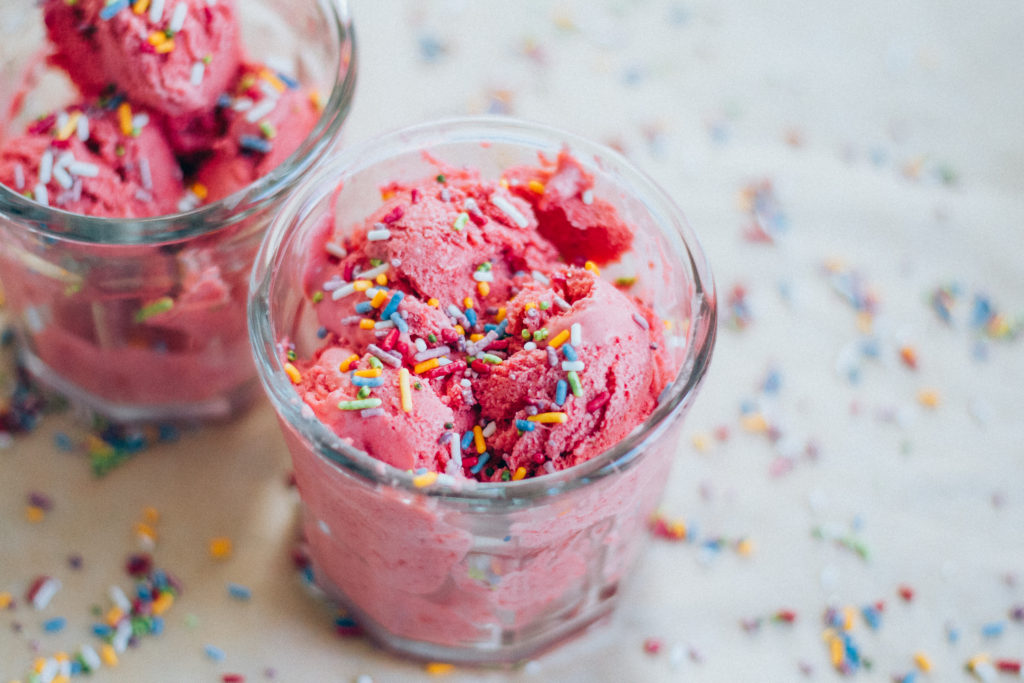 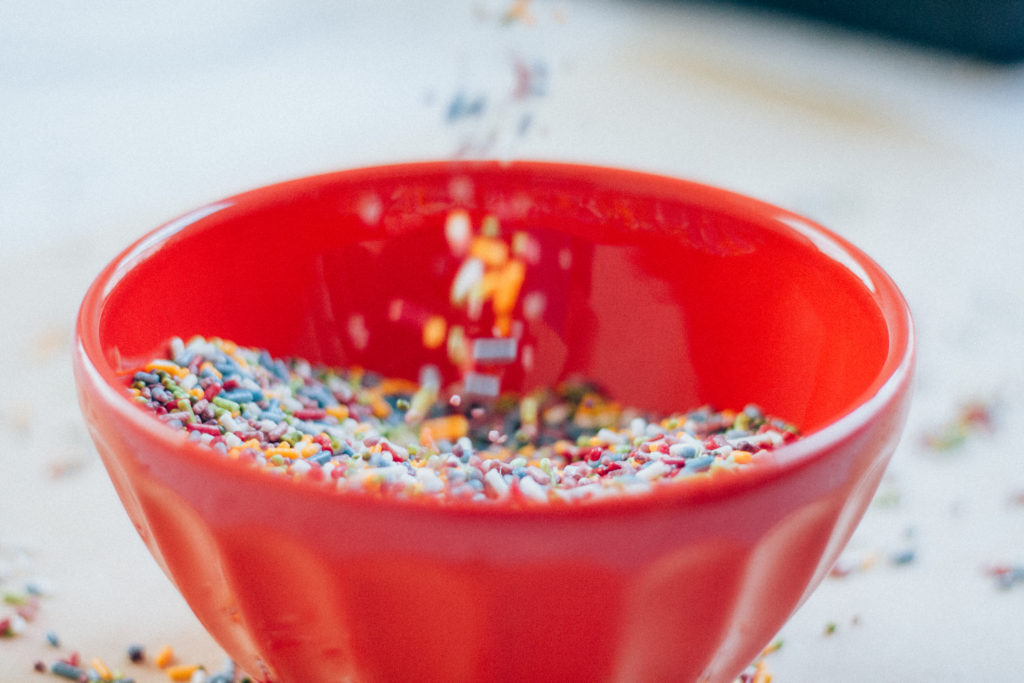 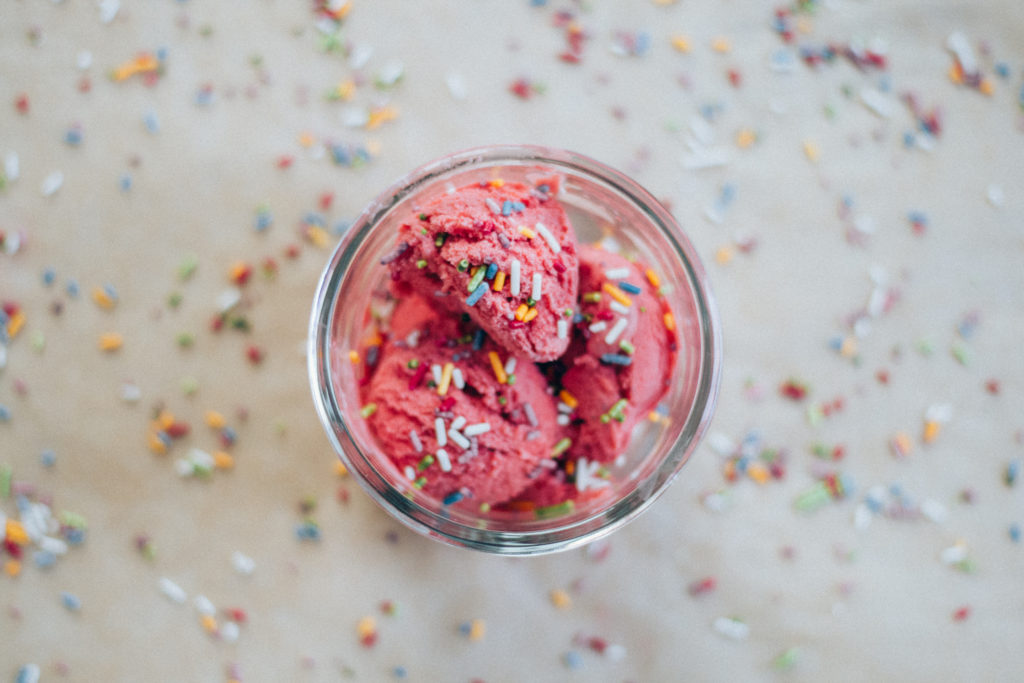 The problem, however, with making ice cream without an ice cream maker is the whole freezing part. An ice cream maker works by continually churning the ice cream in a frozen environment, which prevents the mixture from solidifying into a rock, and instead gives ice cream its signature creamy texture. So if you want to make ice cream without a machine, it naturally stands to reason that you have to find a way to get the mixture to be continually moving around, or create a blend that doesn’t freeze through all the way. That’s where dates are helpful – they’re already solid, so when you mix them with any sort of liquid, the dates act as a sort of “buffer” that keeps the mixture from freezing into a huge ice cube.

But now we get to the time / ingredient problem. As much as I would like to make a creamy ice cream, I don’t have the time to take the mixture out and stir it every 4 hours. On the other hand, I try to avoid medjool dates as much as possible because they’re not available everywhere, and are so darn expensive!! For me at least, they’re more of a luxury than something I can regularly use in my cooking. 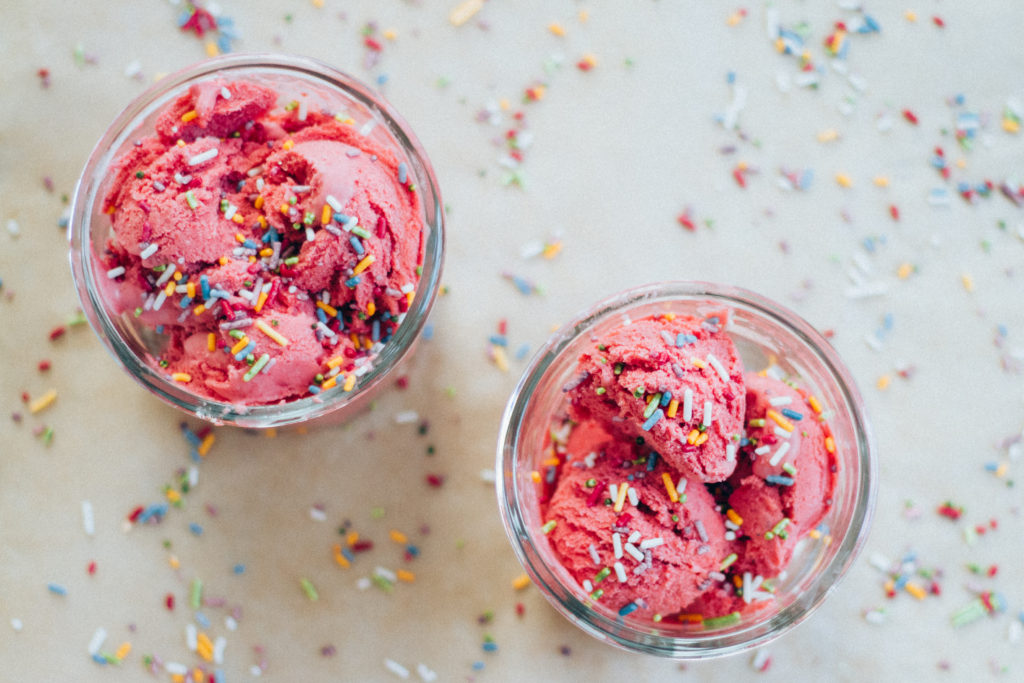 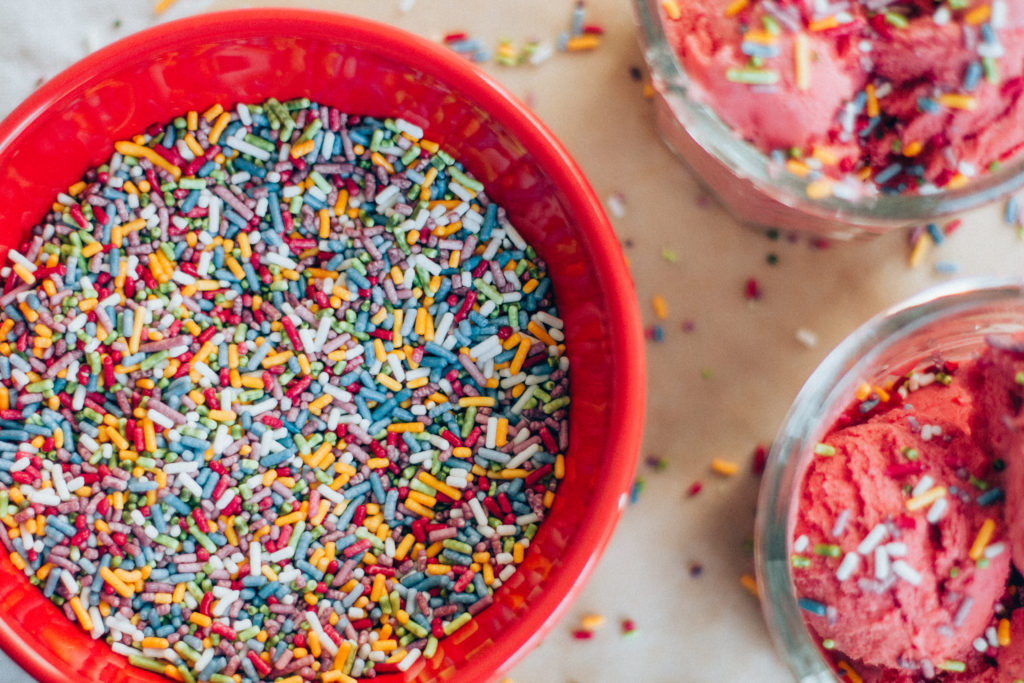 So how do you make inexpensive, non-time-consuming, but SCRUMPTIOUS ice cream? After much experimentation, I think I’ve found a great recipe that makes deliciously creamy ice cream! The secret is in the strawberries – by freezing them beforehand, you’re kind of imitating the churning process by freezing the ingredients in stages (as opposed to all at once). Because the strawberries are blended with the other ingredients once they’re already frozen,  the strawberry ice crystals give the mixture more body (instead of creating a giant strawberry ice cube).

As always, this recipe was taste tested on my non-vegan friends, and they absolutely loved it. To be honest, I was nervous showing this ice cream to them because it doesn’t taste exactly like traditional, dairy ice cream – it’s infinitely more natural and (in my opinion) much more refreshing than its milky counterparts. But I will leave the critiques up to you! I hope you love this ice cream as much as we did :) 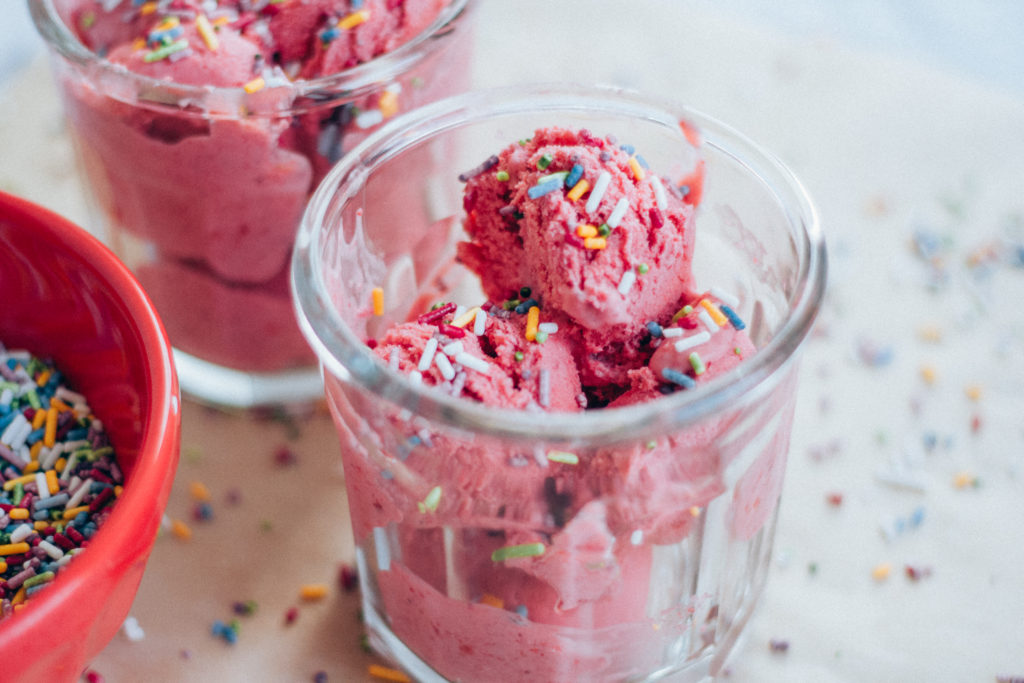 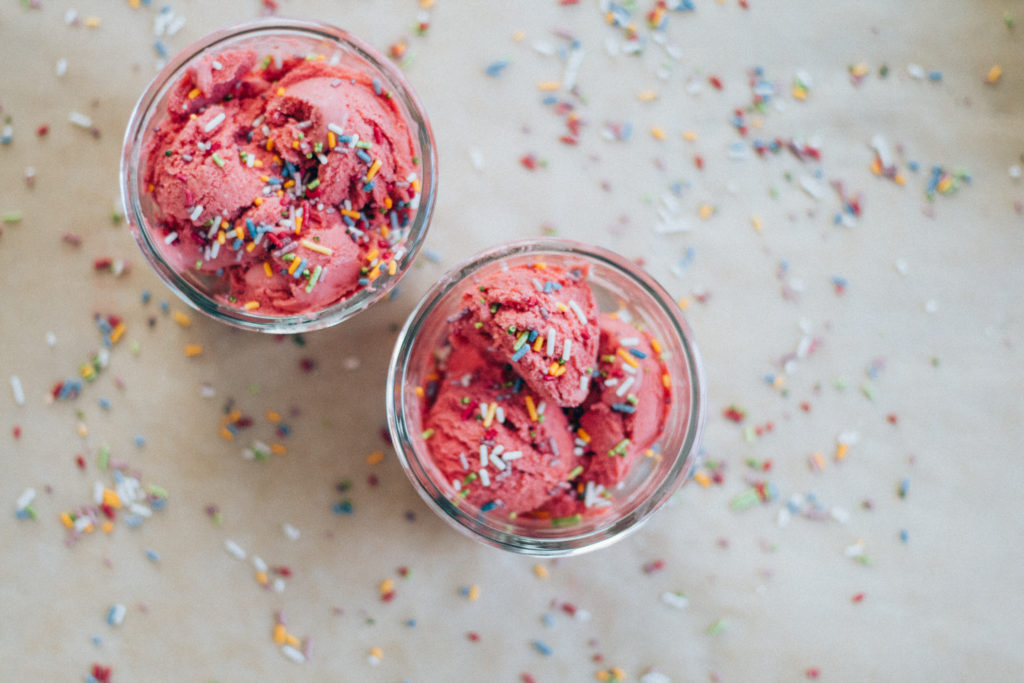 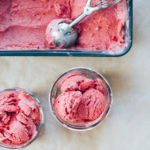 This vegan, no-churn strawberry ice cream has only four ingredients and is incredibly easy to make! No ice cream maker or continual stirring required. 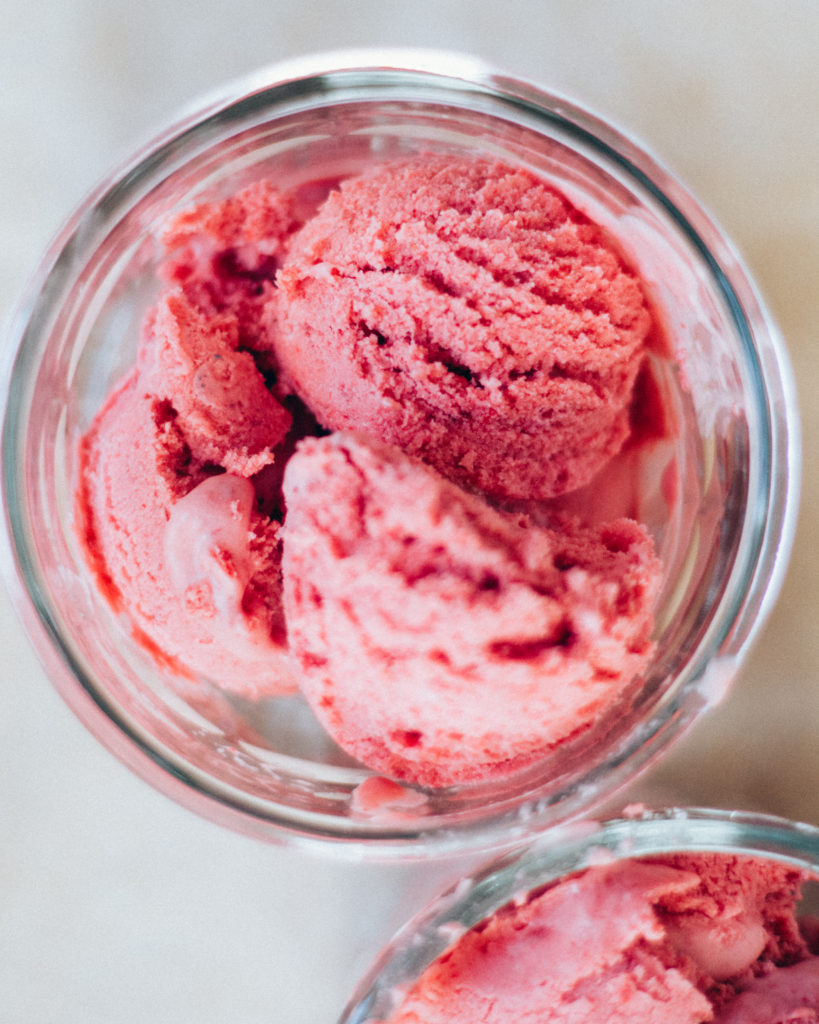 Dance For You – Dirty Projectors

If you make this recipe, be sure to tag me on Instagram @wellandfull so I can see! :)