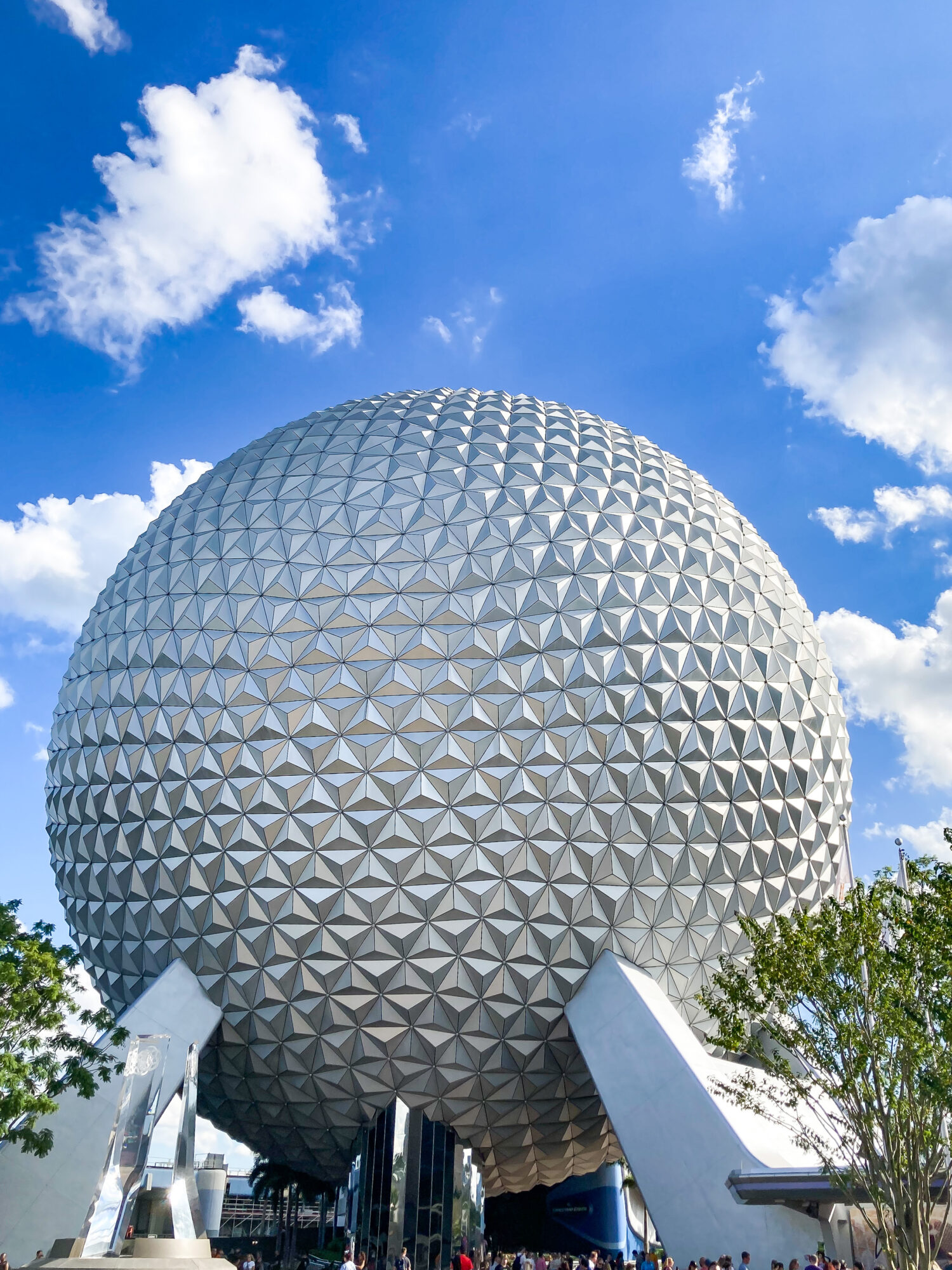 A roundup of the best things I ate at the EPCOT Food & Wine Festival 2021! Including pistachio cake, spicy githeri, and Italian margaritas!

Some of the earliest memories of my life are at Disney World. They’re also the happiest, too. I know Disney isn’t for everyone, and I know it’s very much in vogue to hate on “Disney Adults” right now. But I’m not going to get into a long speech about how people should just let other people live their lives, and enjoy the things they like…. no…. I won’t get into that… ;)

If you will join me for a quick armchair analysis, I think one of the reasons I love Disney so much is because it represents me and my family before the world became harder and sadder. I lost my beloved grandmother to a horrific battle with triple-negative breast cancer when I was nine. Some of the best memories I have with her are from Disney World. Then, barely 10 years later, my grandpa passed away after suffering from heart disease. Some of my best memories with my grandpa are from Disney World, too. And I cling to those memories of when my grandparents were still alive, and my cousins and I didn’t have any other cares in the world than which ride we’d go on next.

I think there’s something so universal to want to hold onto your inner child, to forget about the worries and burdens that come along with being an adult and just lose yourself in a magical experience. That’s how I feel at Disney World. And especially at the EPCOT Food & Wine Festival 2021!! So I’m going to write a blog post about it! Cool? Cool.

This festival has occured every year at EPCOT, one of the parks at Disney World, since 1995. At the World Showcase, each country has featured foods that are representative of their cuisine. In addition to the permanent countries like Morocco, France, and Japan, smaller booths from other countries/regions are featured, such as Brazil, The Alps, or Kenya.

I was only at Disney World for three days, so I wasn’t able to try every single thing at the Festival. Also, I stuck only to the vegetarian options (of which there were plenty!). Even with these limitations, it was a blast trying all of the different foods. Here were some of the best things I ate: 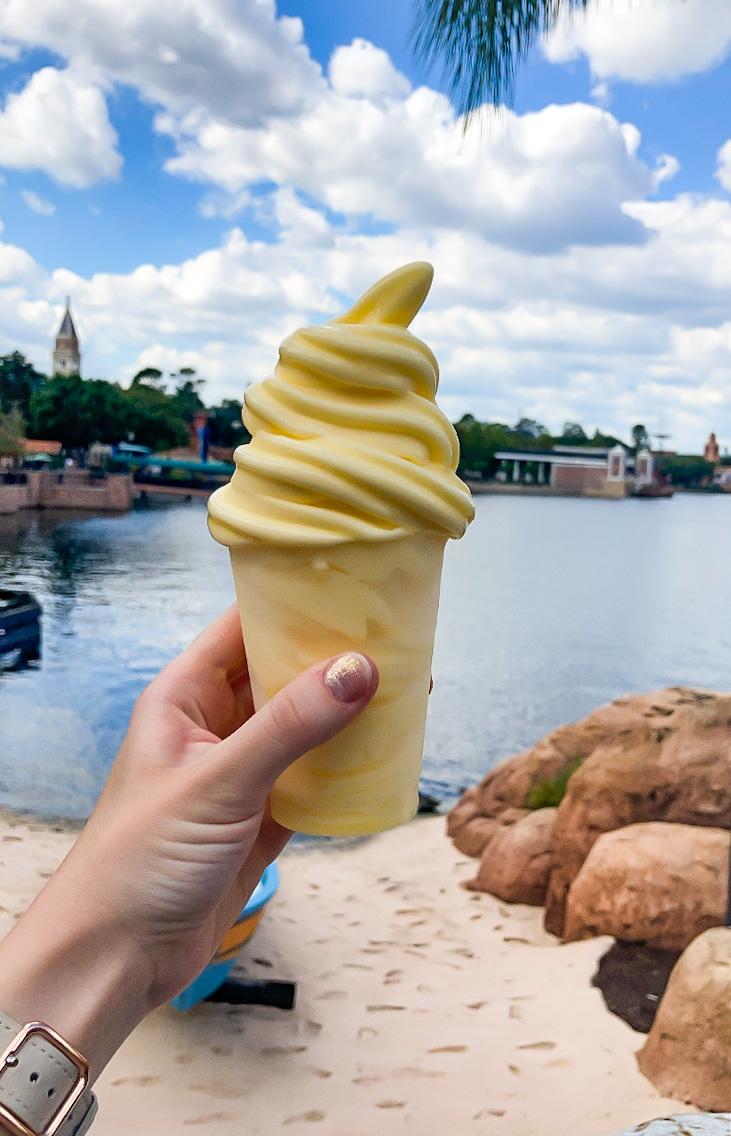 This wasn’t technically part of the Food & Wine Festival, but you can’t go to Disney World without having Dole Whip. You just can’t! It’s one of Disney World’s most quintessential foods. It’s a delicious frozen pineapple soft serve, and the classic version is 100% vegan! You can also get a version with vanilla ice cream swirled in, which is vegetarian. 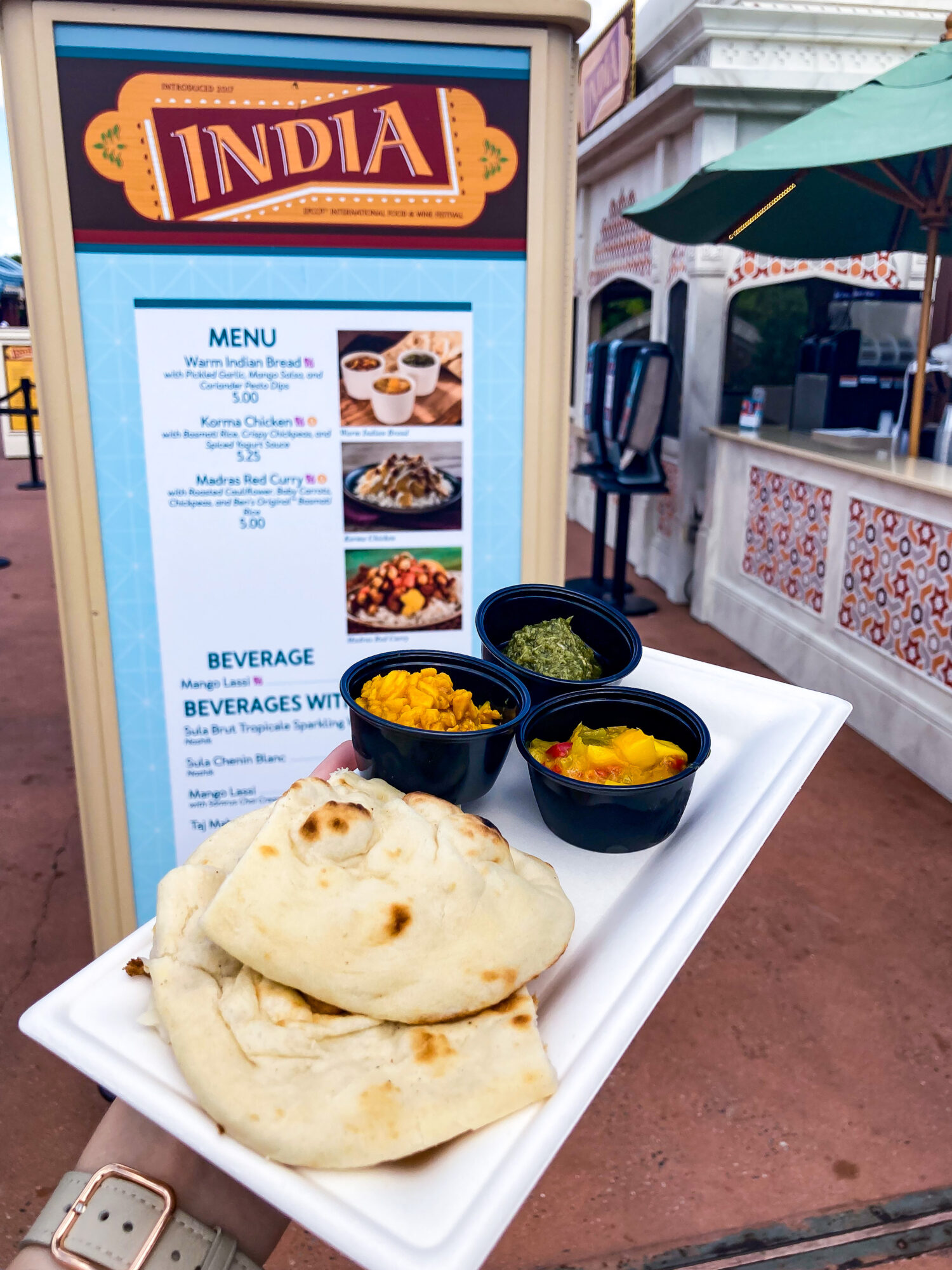 This was one of my top favorite foods I tried this year. It’s warmed naan bread served with three Indian-inspired dipping sauces – pickled garlic, mango salsa, and coriander pesto. I want to clarify here that Disney really whitewashes many of its dishes. For example, the mango “salsa” and coriander “pesto” were really chutneys, or close approximations. Unfortunately, a lot of Americans don’t know the traditional names of many foreign dishes. Labeling them with names that more Americans will know might be done with the intent of making the dishes more accessible. This is just me guessing, though. As much of a bummer that this is, I still want to share how delicious this Indian food was.

My absolute favorite part of the dish was the coriander pesto. It was spicy, savory, and incredibly flavorful. I definitely need to recreate this dish at home!! 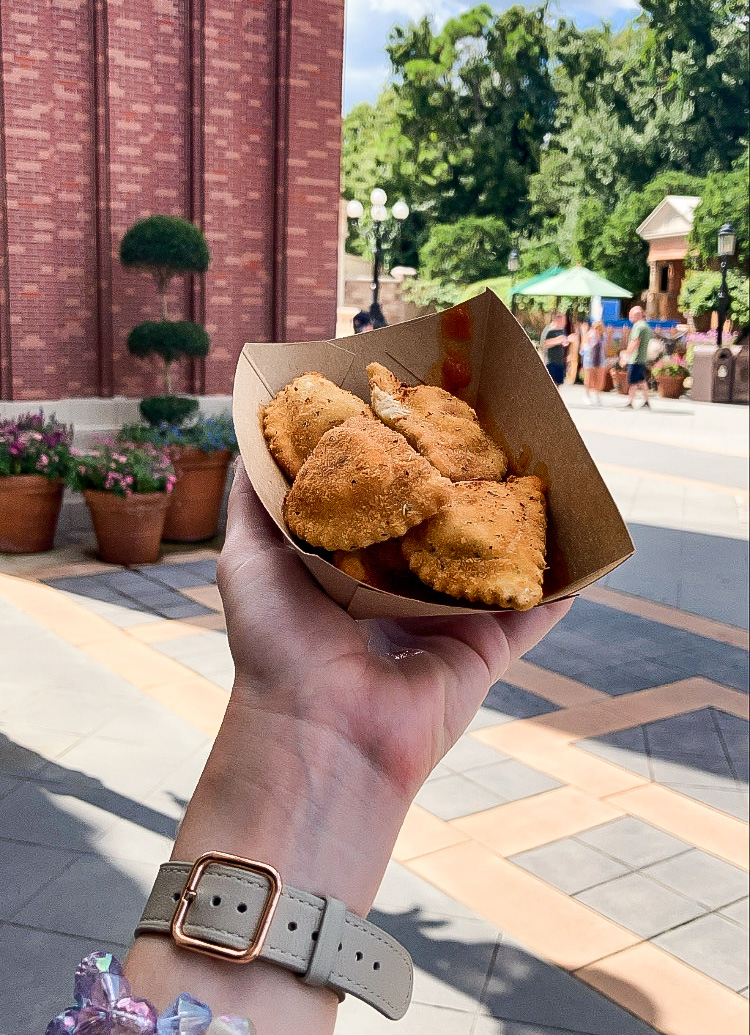 Again, this was not an authentic dish by any means. However, it was authentically delicious! The mezzelune (half-moon shaped pasta) were stuffed with cheese, then breaded and deep-fried. They came with a marinara sauce for dipping, and I was in pure heaven. 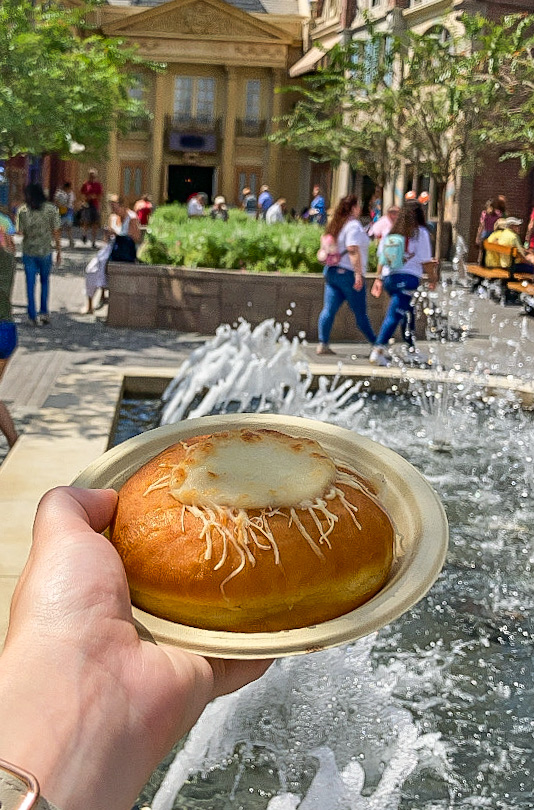 This was a cross between a donut and a quesadilla and I was NOT mad about it. The beignet, a deep fried donut-esque French pastry, was stuffed with three types of cheese. I was very pleased with this choice! 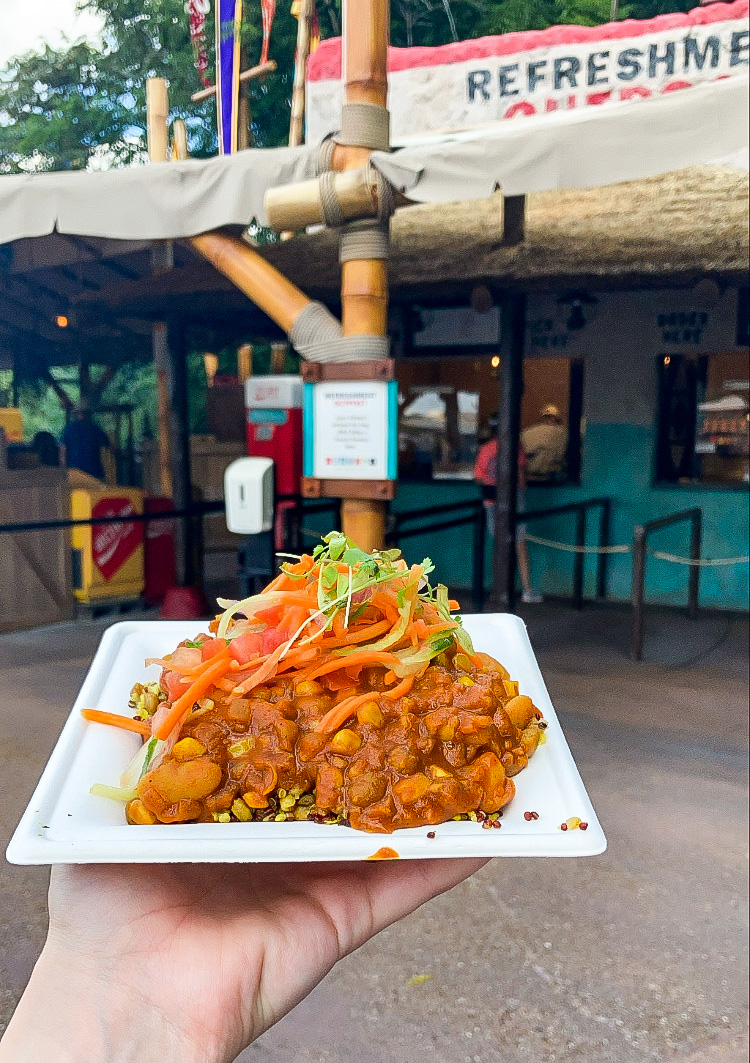 5 // SPICY GITHERI FROM THE REFRESHMENT OUTPOST

Githeri is a mind-blowingly delicious vegetarian dish from Kenya. The Disney version was made with white beans, pigeon peas, a quinoa and ancient grains medley, and a Kachumbari slaw with carrots, tomatoes, and onions. Y’all, this one was GOOD. I would describe the githeri as being similar in texture to a curry or stew (like this one!), and it was perfectly complemented with the grains and slaw. I definitely hope they bring this dish back next year! 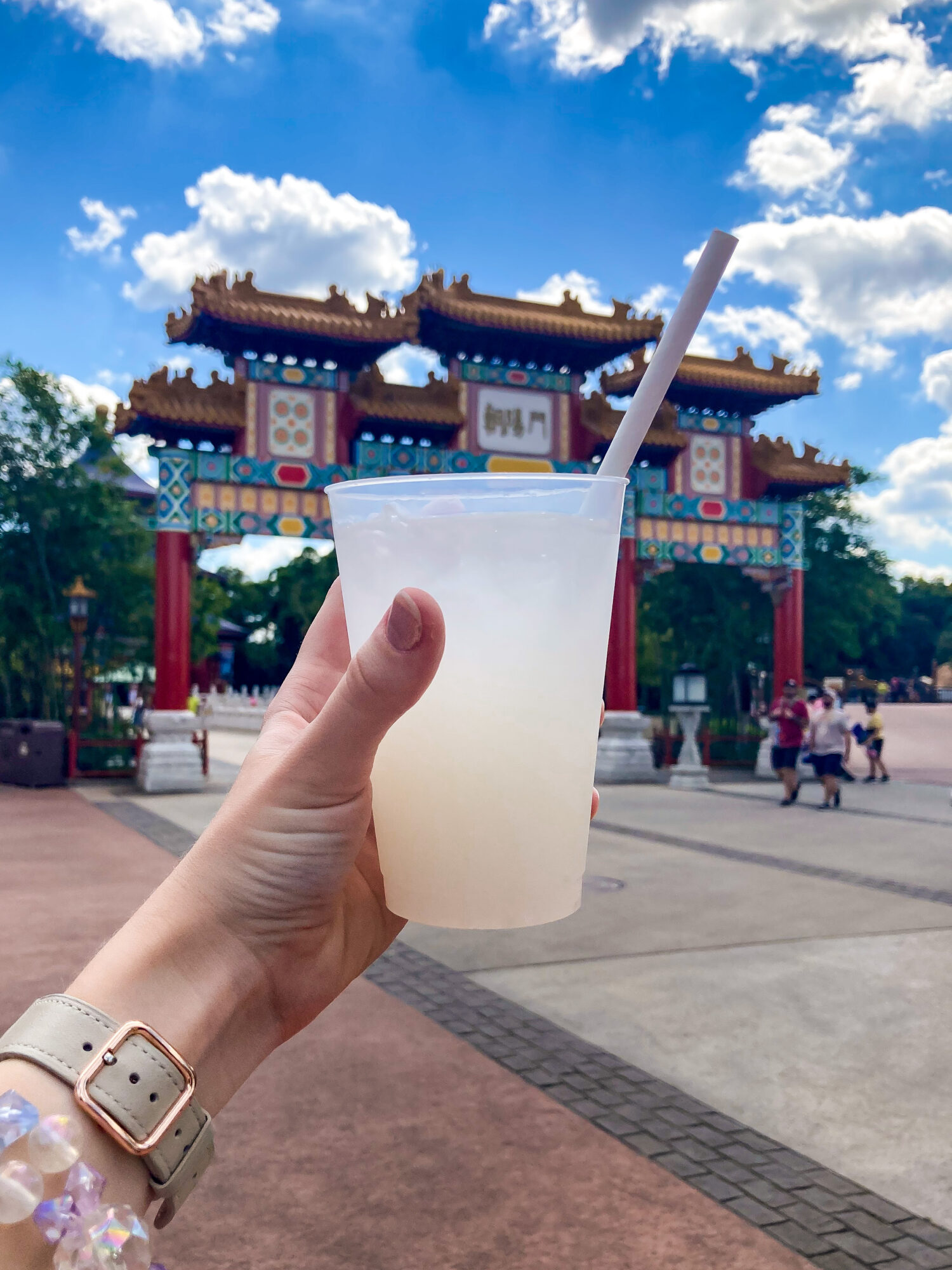 Byejoe is a Chinese spirit distilled from sorghum and infused with lychee. The cocktail was mixed with lychee syrup, piña colada mix, and soda water. It was the perfect refreshing sip as I ate around the world! This is also something that I definitely need to recreate at home. 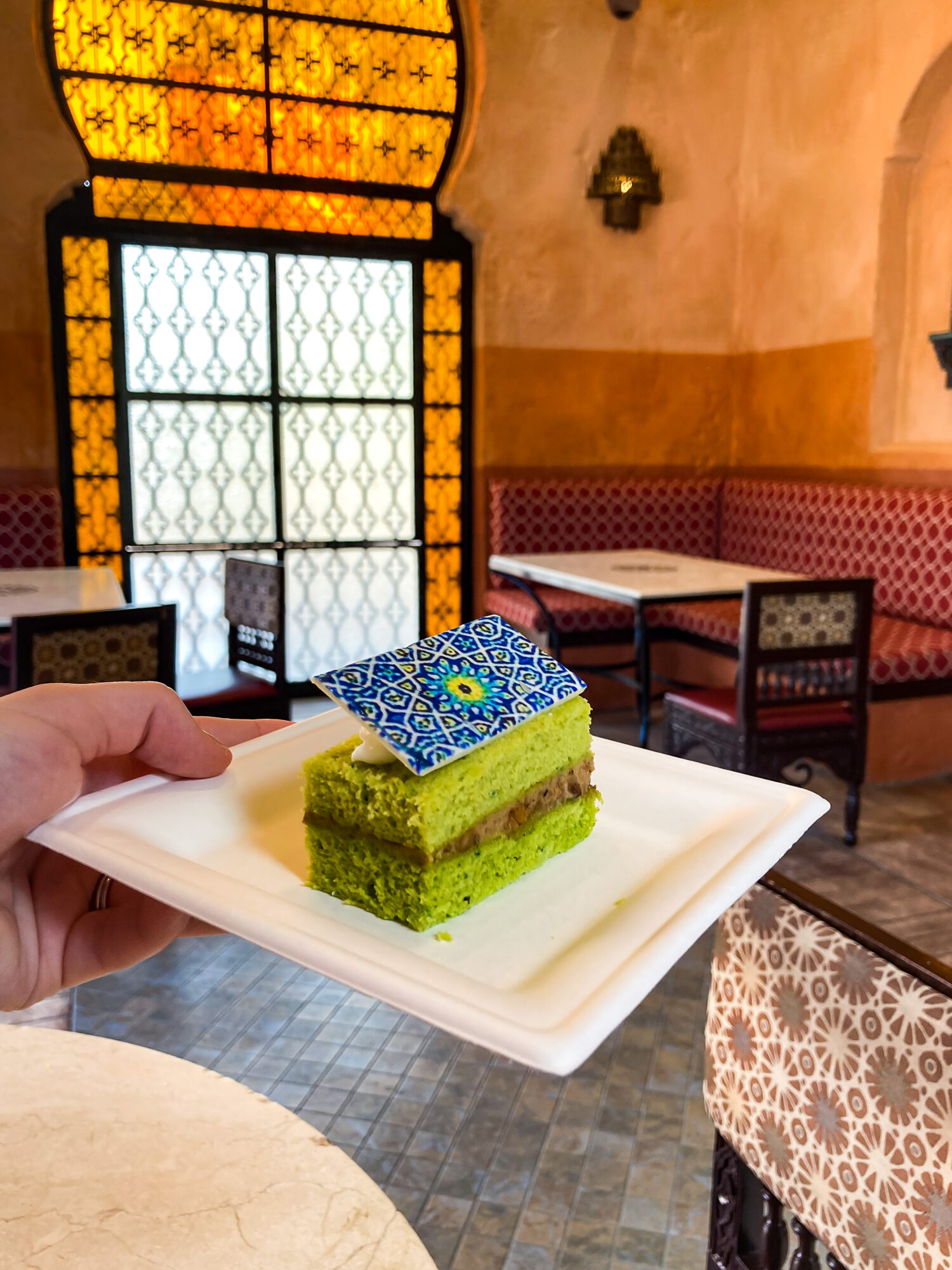 This cake was a revelation. The fluffy, pistachio-flavored cake was paired with cinnamon pastry cream, candied walnuts, and a white chocolate garnish inspired by Moroccan tile designs. I’m not a big sweets person, but this was SO GOOD. 10/10 would eat again! 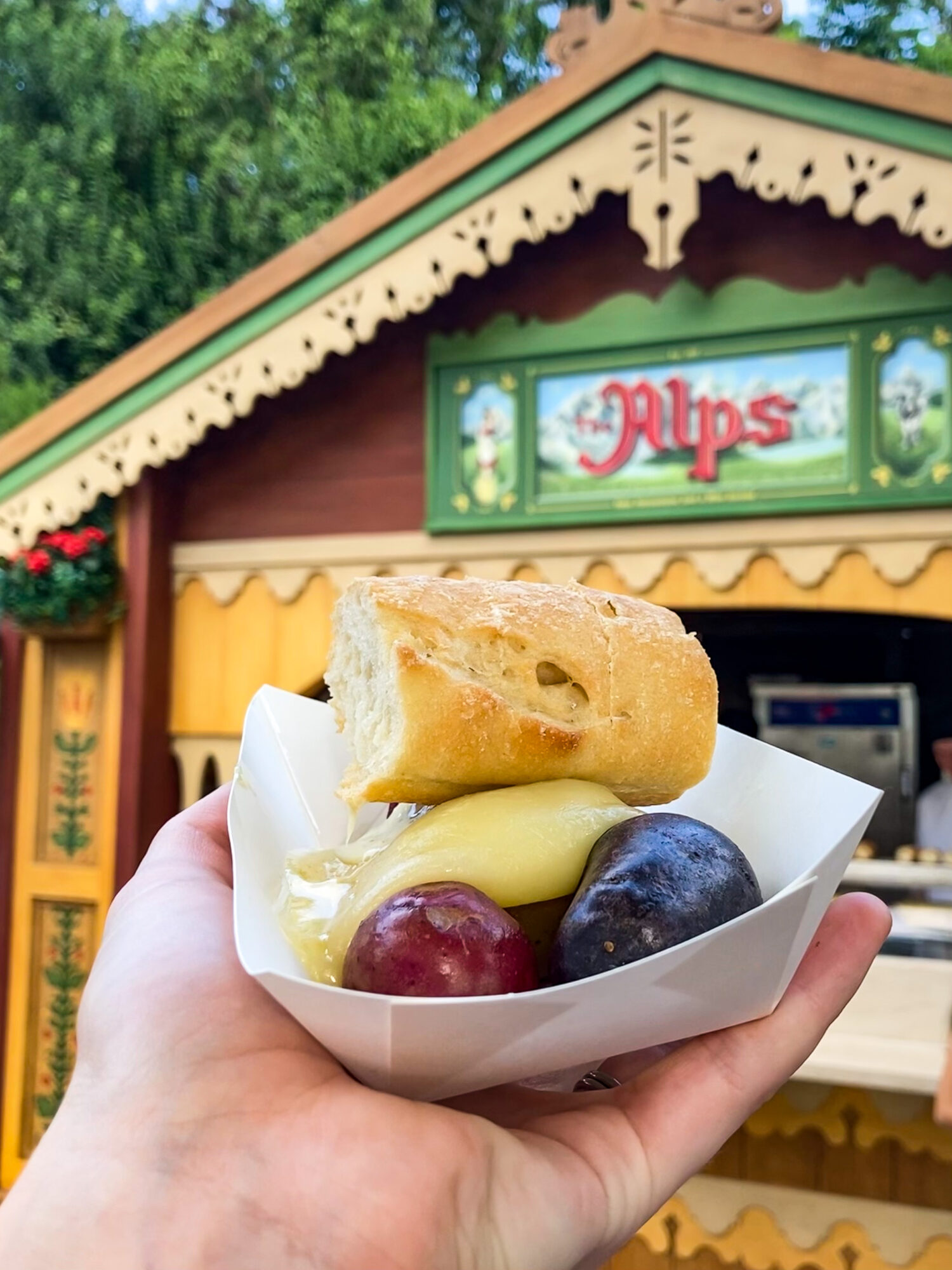 8 // WARM RACLETTE WITH BABY POTATOES, CORNICHONS, and a BAGUETTE FROM THE ALPS

The Alps aren’t a country, but I’m so glad Disney decided to include them in their Food & Wine Festival! I listen to a podcast called Coffee Break French to keep the language fresh in my mind, and my favorite episode was all about Raclette! It’s a delicious, savory cheese from Switzerland that is perfect for melting. As much as I love bread, I actually loved it here with the potatoes! And I’m always down for cornichons, a type of mini pickle. 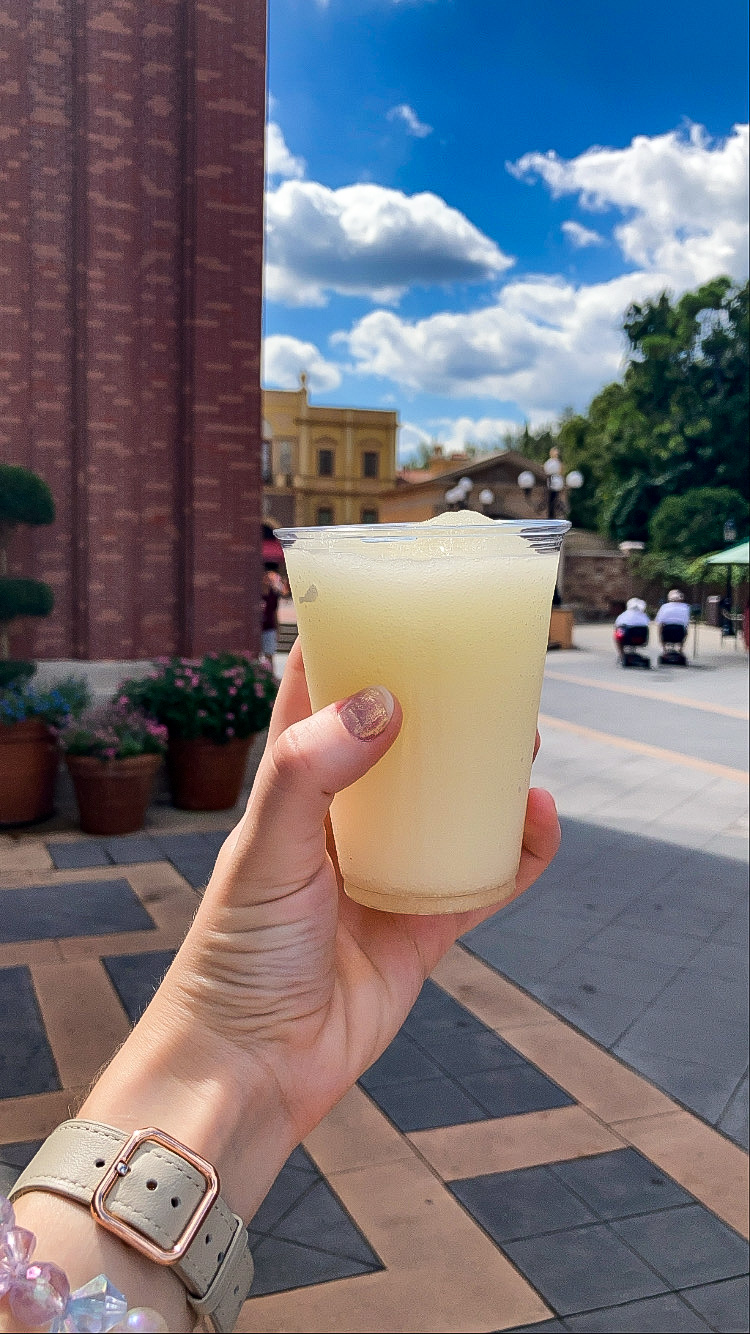 Again, this is not an authentic offering whatsoever. But this drink did not disappoint! This Italian/Mexican fusion frozen margarita slushie was made from tequila and limoncello. It was tart and very refreshing after walking around in the heat all day! 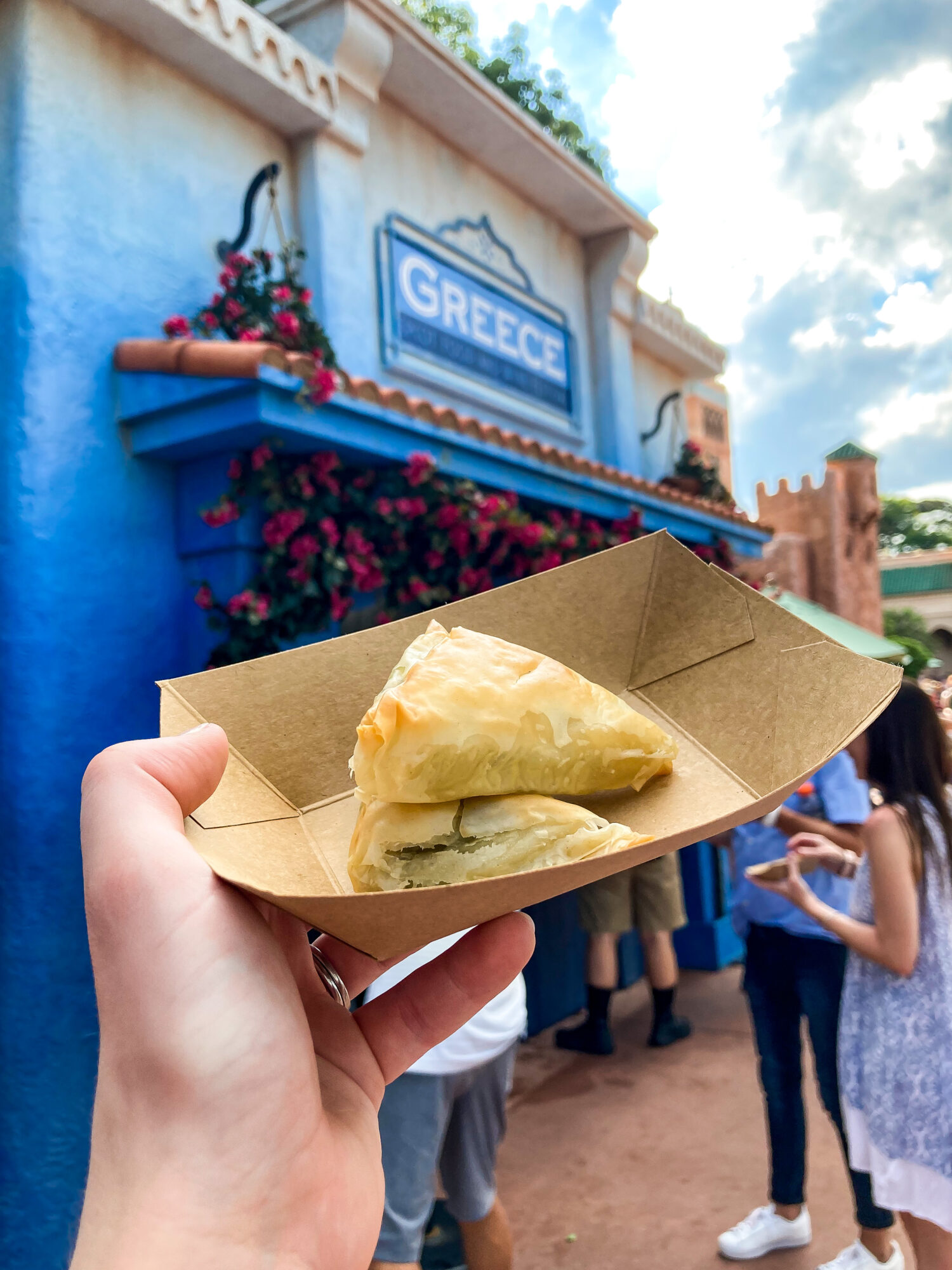 This was another one of my top favorites from the Food & Wine Festival. I actually think this was the first dish I ate when I got to EPCOT! Spanakopita is a Greek savory pastry made from buttery phyllo dough, spinach, and cheese. In other words, a little bite of heaven!! They served the spanakopita in little handheld triangles, which were super convenient to eat while walking around.

Okay well now that I’m absolutely starving and dying to go back to the Food & Wine Festival, I’m going to sign off! I hope you liked this primer about the Disney Food & Wine Festival. In the future of my blog, I’m hoping to include more non-recipe food content, like restaurant reviews and Disney foods. Let me know what you think by email or in the comments! 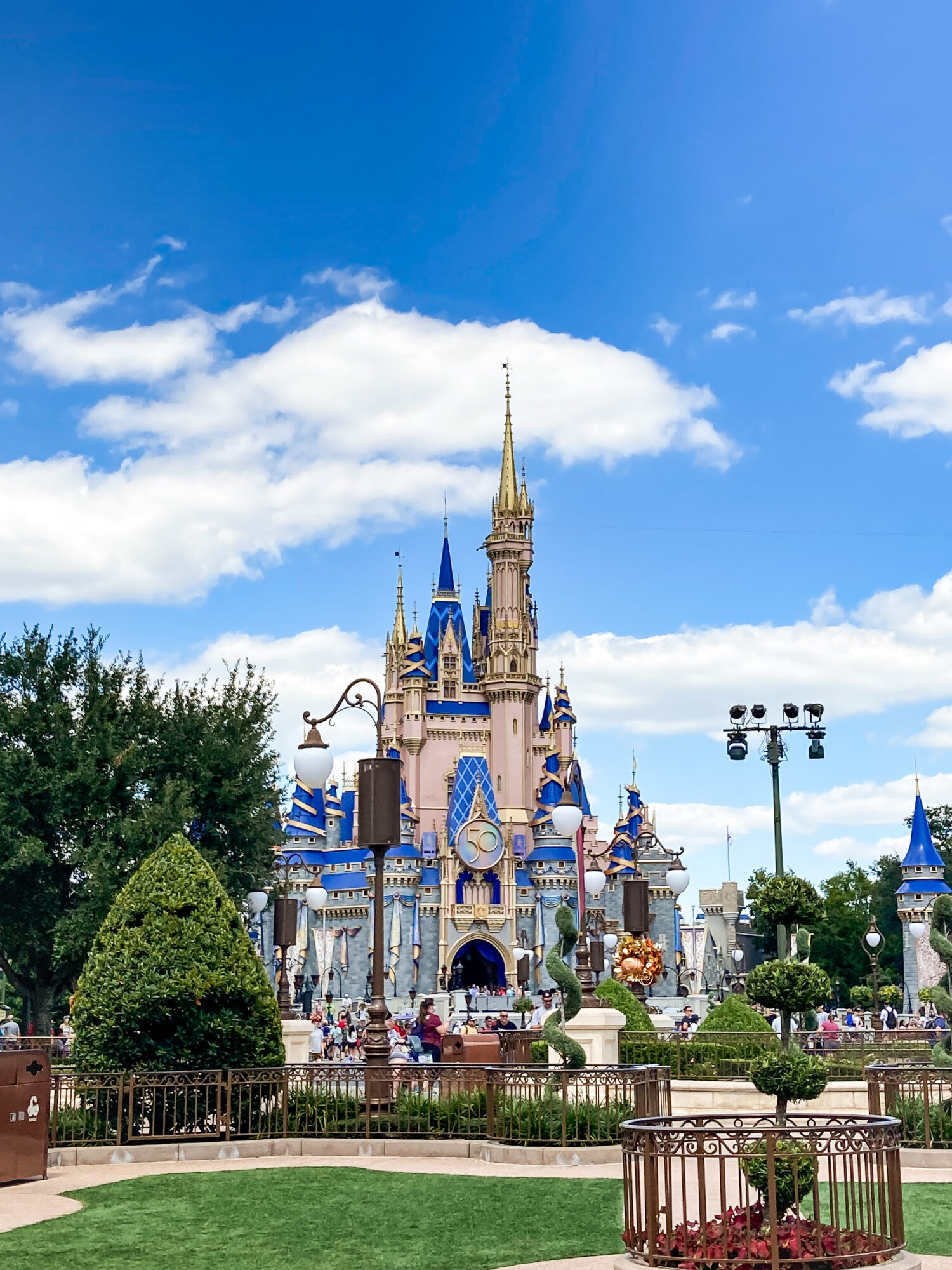 For more vegan and vegetarian recipes and meal inspiration, be sure to follow along on Instagram @wellandfull! If you make a recipe, please tag me in the photo and use the hashtag #wellandfull so I can see! And if you went to the EPCOT Food & Wine Festival 2021, leave me a comment or message letting me know what you ate! :)

byejoecarrotscheesechutneycilantrocorianderdisney worldEPCOTfestivalfood & winegitherilentilsmezzelunenaanpistachiosspanikopita
October 10, 2021 By Sarah
0
Why Do Food Bloggers Write So Much? Pumpkin Pinwheels