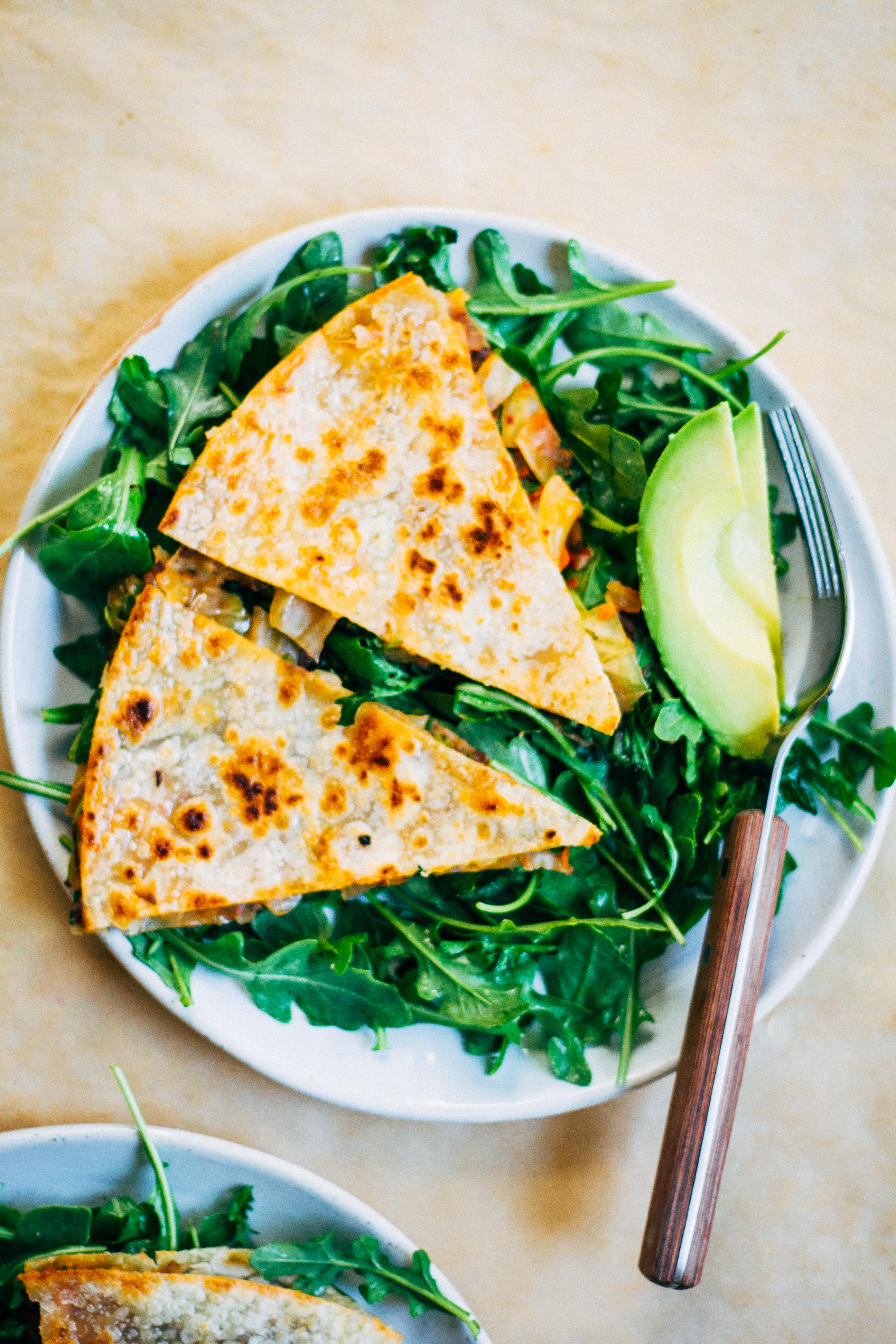 These easy, healthy Vegan Kimchi Quesadillas are perfect for a light lunch or dinner!

When I first went vegan, I thought it would be really hard (read: impossible) to eat out at restaurants. I was worried that I wouldn’t be able to go out anymore; or if I did, I would be a huge drag on my friends / family / whoever I was with. But I couldn’t have been more wrong in that assumption. It’s actually way easier to eat vegan at restaurants than I thought it would be. I think in all the time I’ve been vegan, I’ve only had one mishap – where the restaurant put cheese in a veggie burger without saying so on the menu (which is a lawsuit waiting to happen if a customer had a severe dairy allergy…. just saying).

I’m very fortunate that my two favorite cuisines – Mexican and Japanese – are both extremely vegan friendly. At Mexican restaurants, I almost always order fajitas so I can make my own little tacos, with guacamole on the side OF COURSE. (Taking a quick second to thank God right now that guacamole is vegan). And then at Japanese restaurants it’s even easier. The options are so great – vegetable tempura (which is traditionally made without eggs, but I always ask), vegetable sushi, edamame, brown or white rice, vegetable dumplings, miso soup, salad with ginger carrot dressing… JAPANESE FOOD, I LOVE YOU. However, getting to go to a restaurant where everything on the menu is vegan is a very rare treat.

This past weekend, I went up to New Hampshire with my parents to go to the Keene Music & Arts Festival. My parent’s house is in New Hampshire but just on the border of Vermont. For lunch we stopped at Superfresh Café, a local vegan, gluten-free, and farm-to-table restaurant in downtown Brattleboro VT. And oh. my. gosh. IT WAS AMAZING. Just the feeling of knowing I could get anything I wanted on the menu was enough for me to go bounding in with a huge smile on my face. 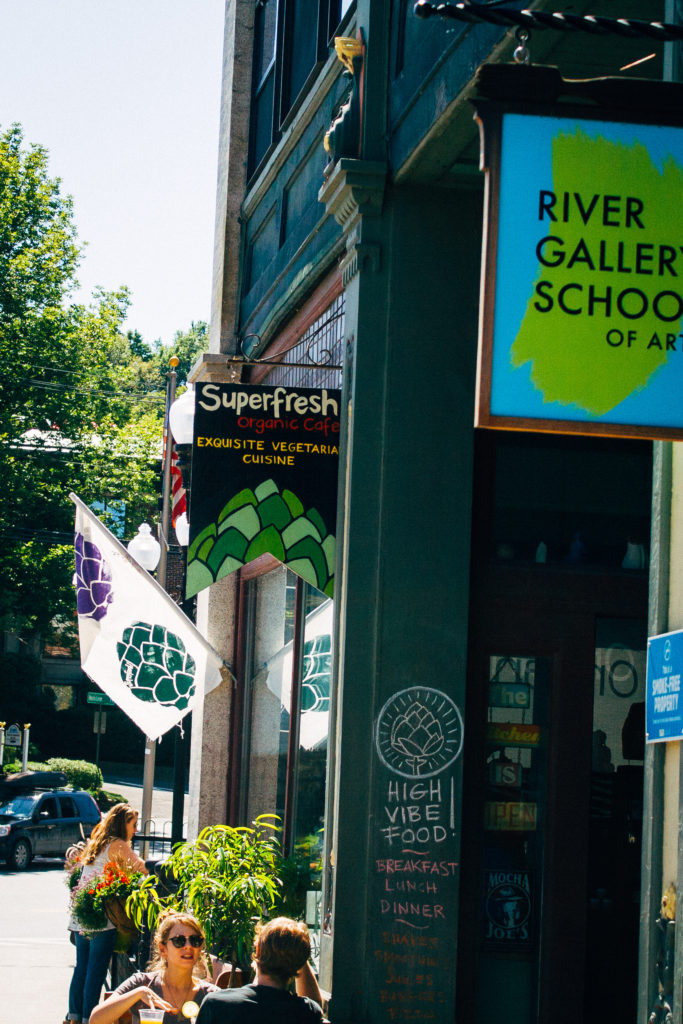 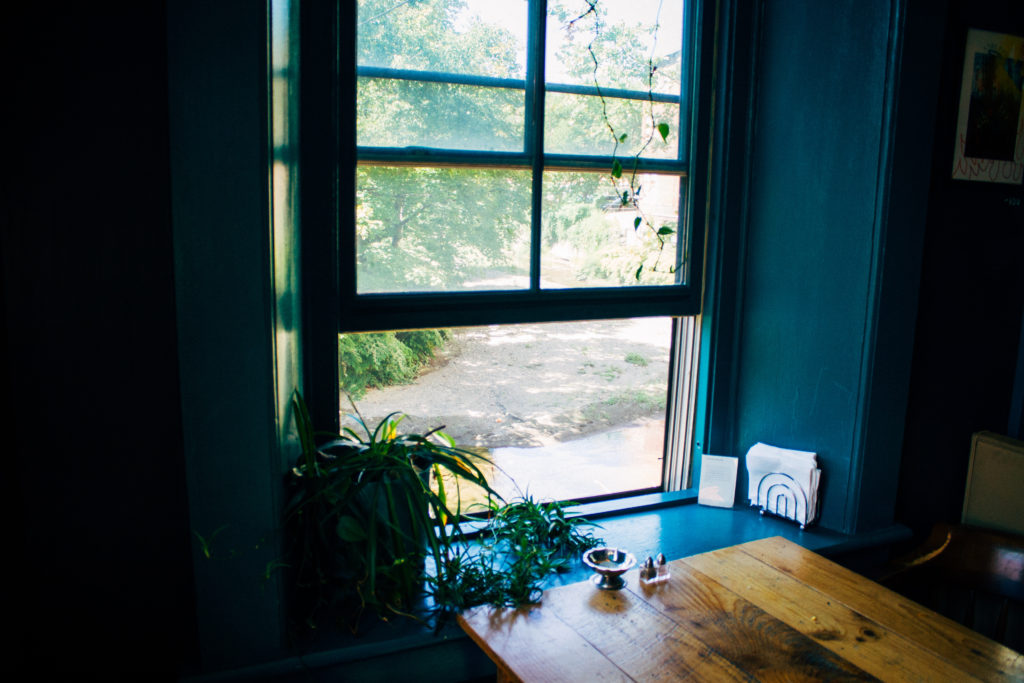 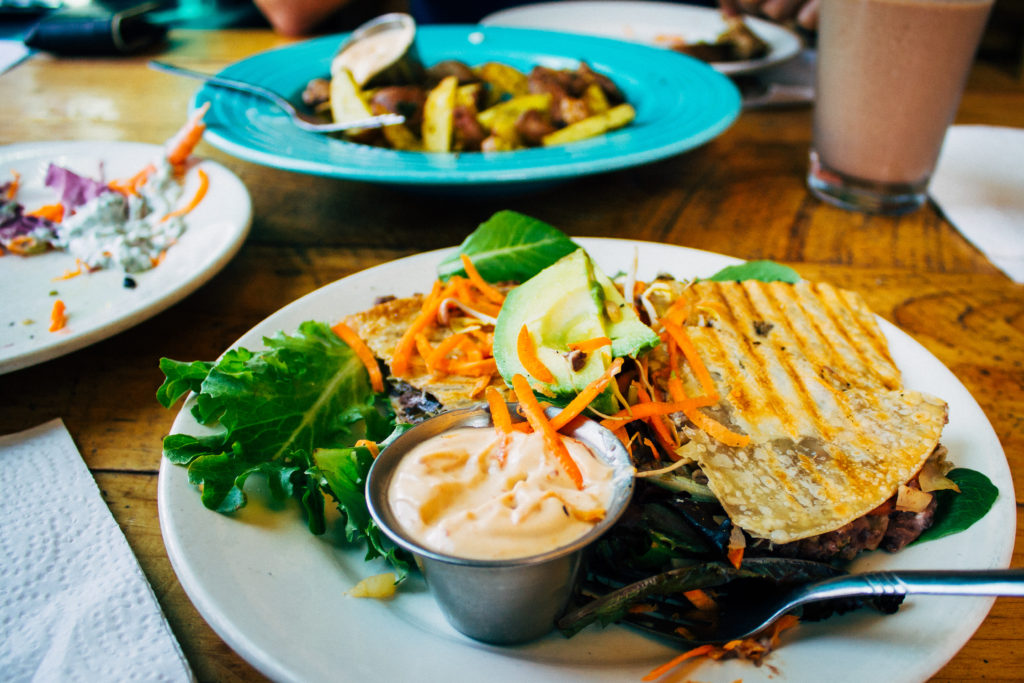 Normally when I go to restaurants I don’t take pictures of the food – I’m a food blogger and I need a break sometimes!! But I made an exception for Superfresh Café because I just knew the food would be good.

This is what we ordered:

3// Oven-Baked Fries with herbs and a chipotle aioli 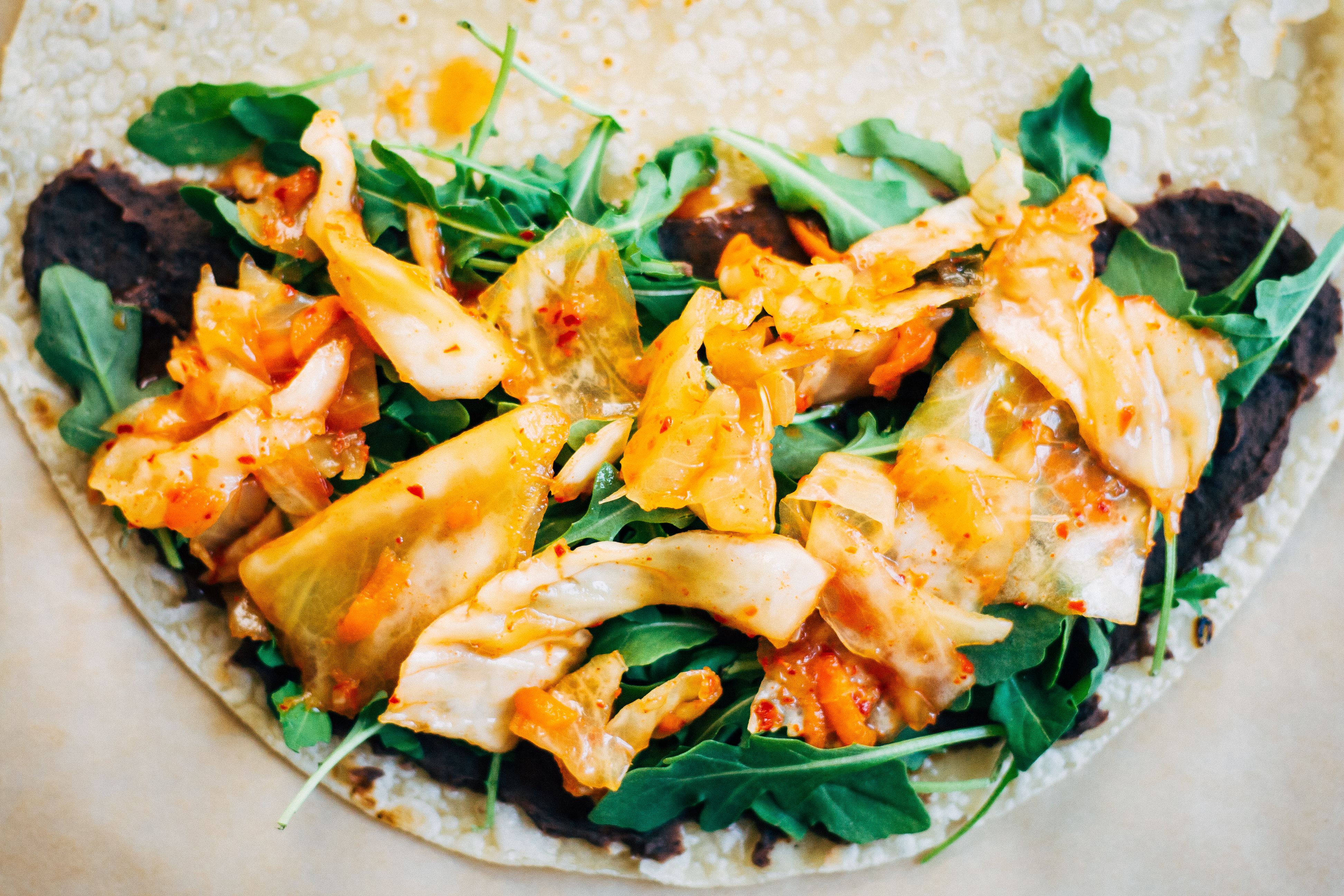 Unsurprisingly, everything was SCRUMPTIOUS. It’s hard to choose, but if I had to pick my favorite thing that I ordered it would be the hash browns. If you look at the last photo in the sequence of the restaurant pictures above, you’ll see that the white plate is completely devoid of hash browns. Somehow they got into my belly before I could take a cohesive photo. But seriously, these were the best hash browns I’ve ever had, and that accolade is even going back into my non-vegan days. It also should also be noted that I’m a bit of a potato fiend and have thus sampled a large variety of hash browns. But these easily took the cake.

My two other favorite things were the kimchi quesadilla and the chocolate mylkshake. Being lactose-intolerant growing up, I never really had a lot of milkshakes. But I do remember what they taste like, and I was amazed at how much the mylkshake tasted like a true chocolate milkshake. It was creamy, thick, chocolately, cool, and perfectly sweet. The experimentation with cashew-based mylkshakes (especially after getting this recipe under my belt!) will commence shortly.

The kimchi quesadilla was also mindblowingly good, to the point where I just had to recreate it at home. The components in here are so genius together – a thick, umami-rich black bean spread, crunchy fresh greens, spicy and tangy kimchi, and a perfectly crispy brown rice tortilla. This last ingredient was fairly new to me – I don’t have gluten sensitivity, so I’ve never really tried gluten-free products. But this brown rice tortilla was so crazy good that I don’t think I can ever go back to their flour-y counterparts. Seriously, if you’ve never tried them before, GO FOR IT. The texture, the taste – it’s just different, but when you sauté them up in a pan with a little olive oil, you get this crunchy, satisfying bite. 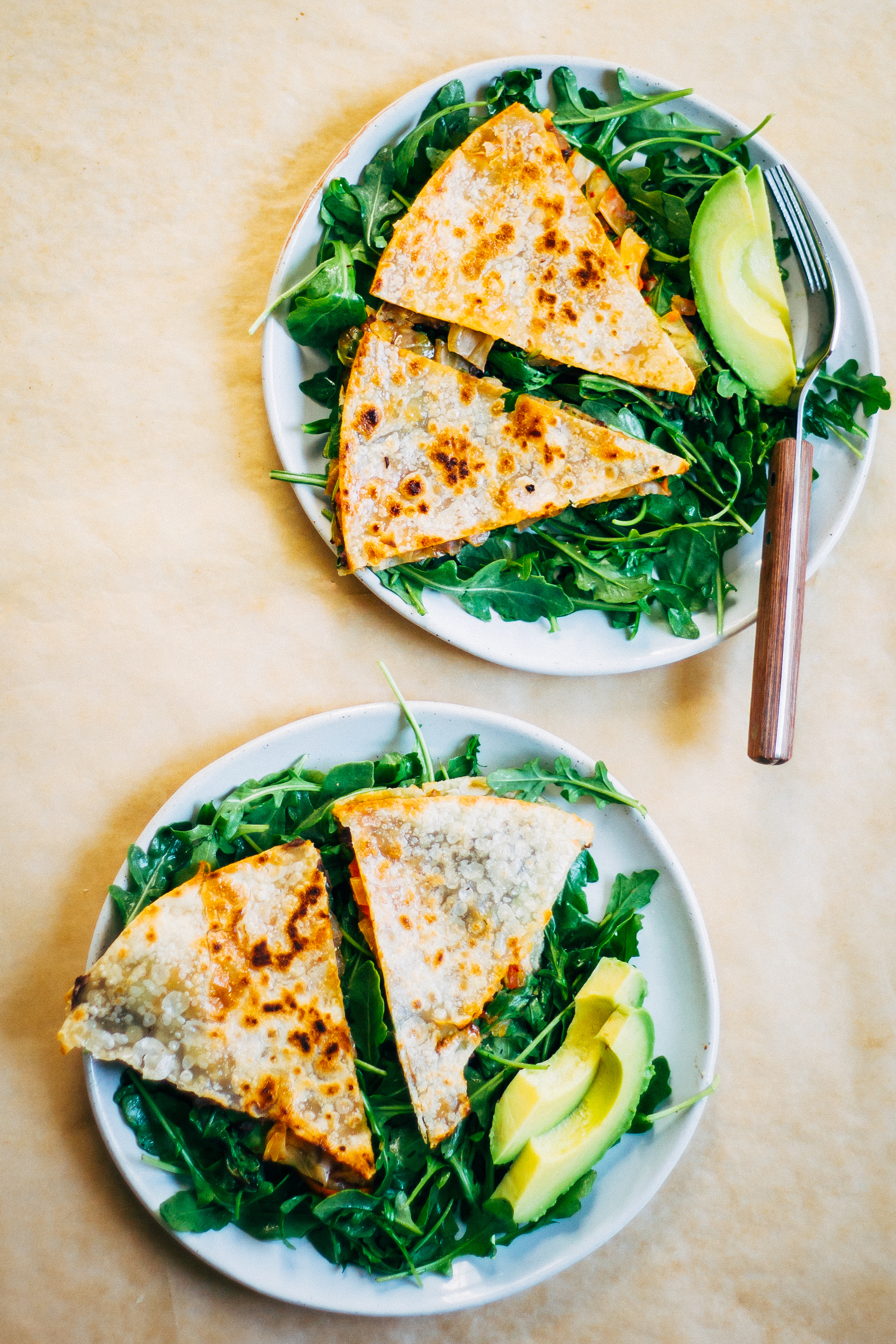 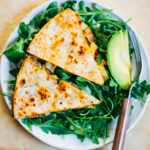 These vegan kimchi quesadillas are game-changing - made with crunchy, gluten-free tortillas, a mouth-watering black bean spread, and peppery arugula.

Putting it All Together

Because brown rice tortillas are gluten-free, they're not as "stretchy" as traditional tortillas. If your quesadilla breaks at the fold, don't worry! 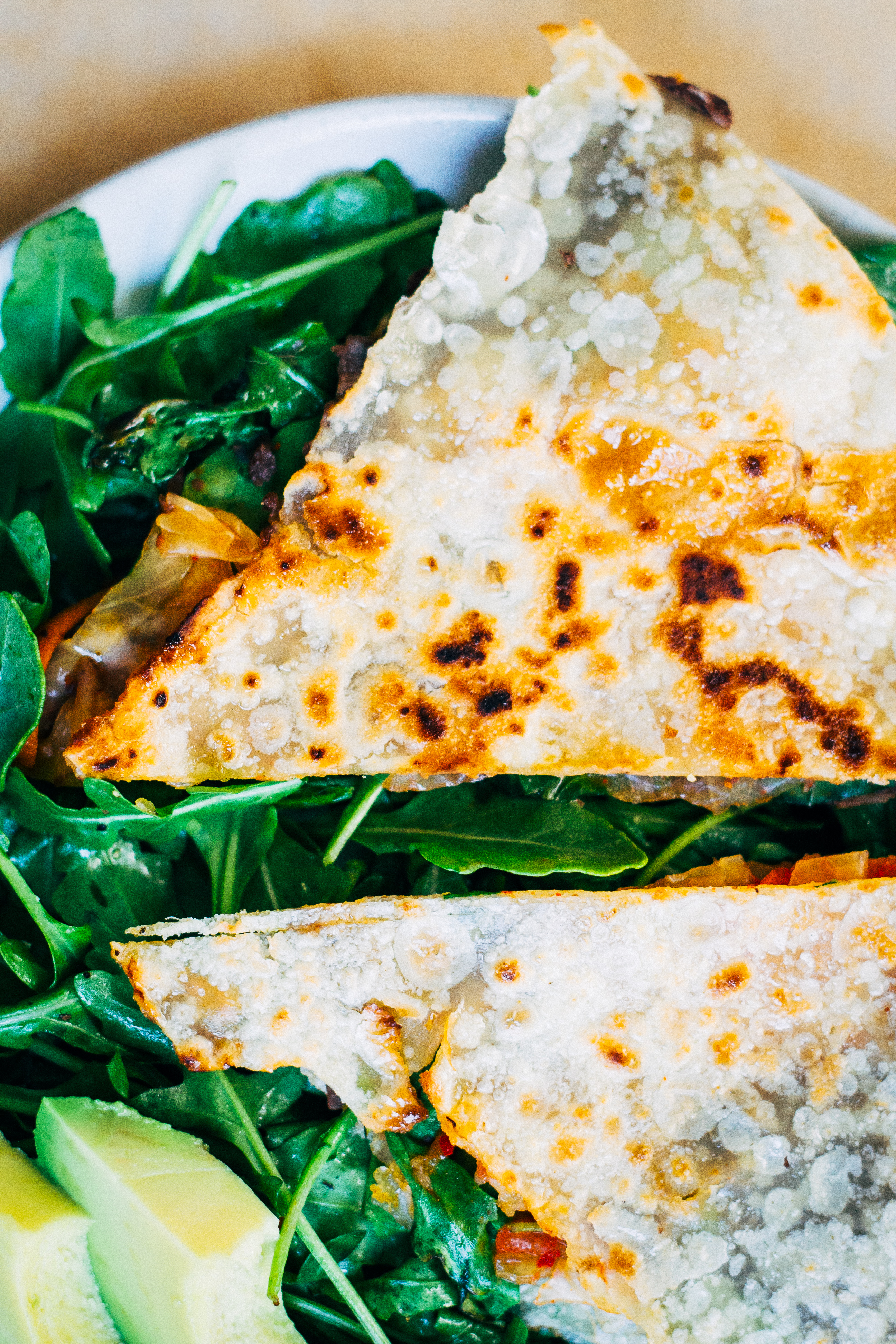 Everything is Moving So Fast – Great Lake Swimmers