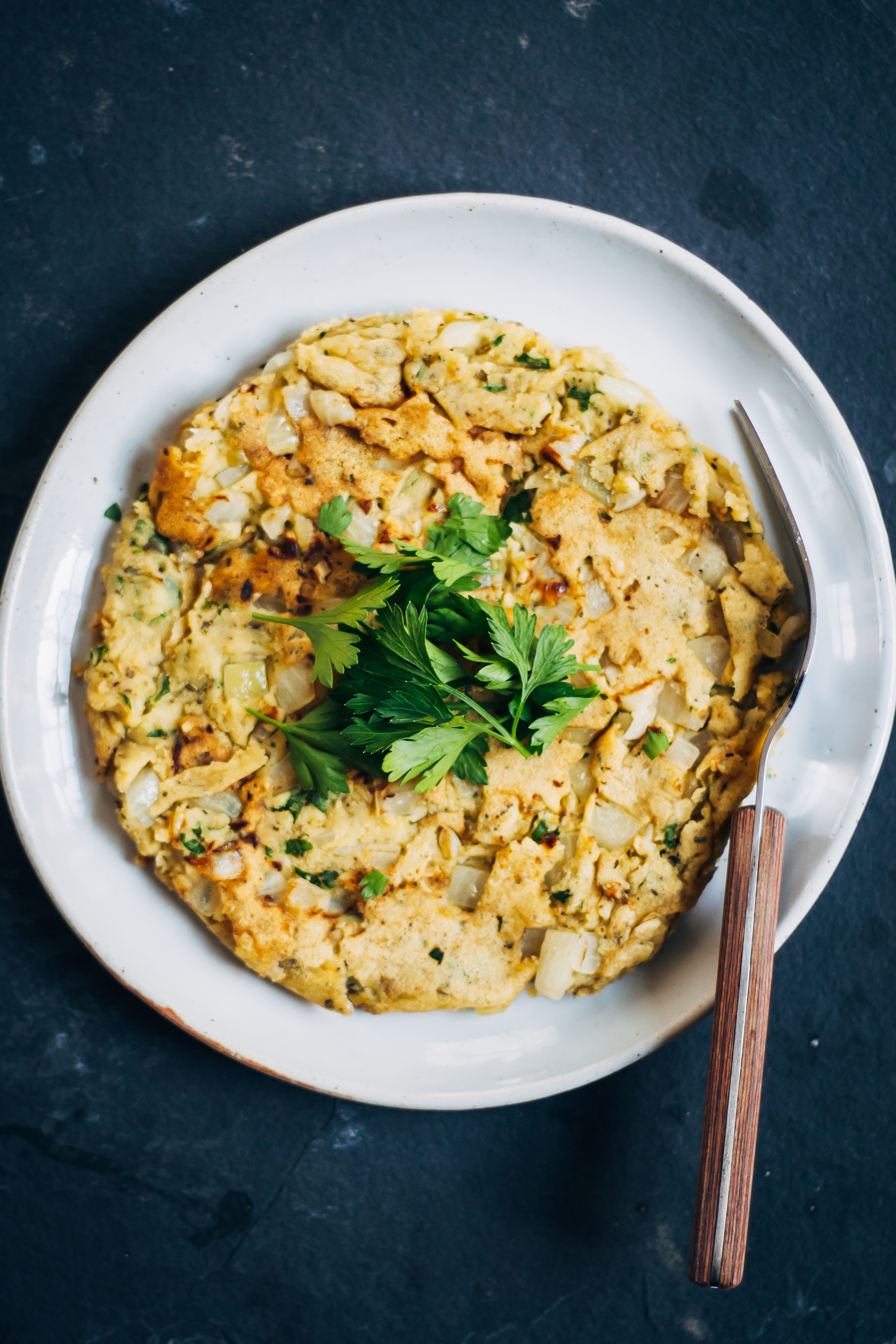 I’m really excited about this post for two separate reasons – first, because I’m finally using a little bit of the cookery I learned during my time in the south of France. And secondly, because this socca is the perfect vegan answer to my breakfast dreams.

You’d never be able to tell from the recipes here, but I’m a total breakfast gal. Well, at least I was in my pre-vegan days. I’d eat toasts, omelettes, scrambles, and breakfast sandwiches with the best of them. And I suppose that ever since I went completely vegan, I lagged behind on my breakfast transformation. I was actually in Whole Foods the other day when I had that thought… I was feeling a bit wistful at the things I couldn’t eat anymore. But as I was looking at the myriad of foods around me (I think I was in the pasta aisle, of all places), I realized that I shouldn’t look at it as “missing out”, but instead an opportunity to try NEW things and reinvent my old favorites. There is SO MUCH STUFF in the world, a mind-blowingly large amount – foods, ingredients, cultures, ideas, techniques – and to get caught in my own insular idea of “breakfast” is exactly the kind of thinking I want to avoid.

So here we go, folks – a new spin on breakfast. Socca is said to have originated in Italy, where it is known as farinata or cecina. In France, however, it is called socca, and I’ve prepared this version with a sauté of garlic and onions, inspired by the piperade I learned how to make in Toulouse, France. Now, to make things more confusing, but in the spirit of gastronomical accuracy, I must mention that piperade is a dish of Basque origin made with peppers and tomatoes. In Toulouse, our cooking class centered around making a piperade with garlic, onion, pepper, tomato, and eggs, omelette style. However, since it’s November now and tomatoes and peppers aren’t in season, I made do with onions, garlic, and herbs. But I’ll definitely be back in eight months or so with the summery version! 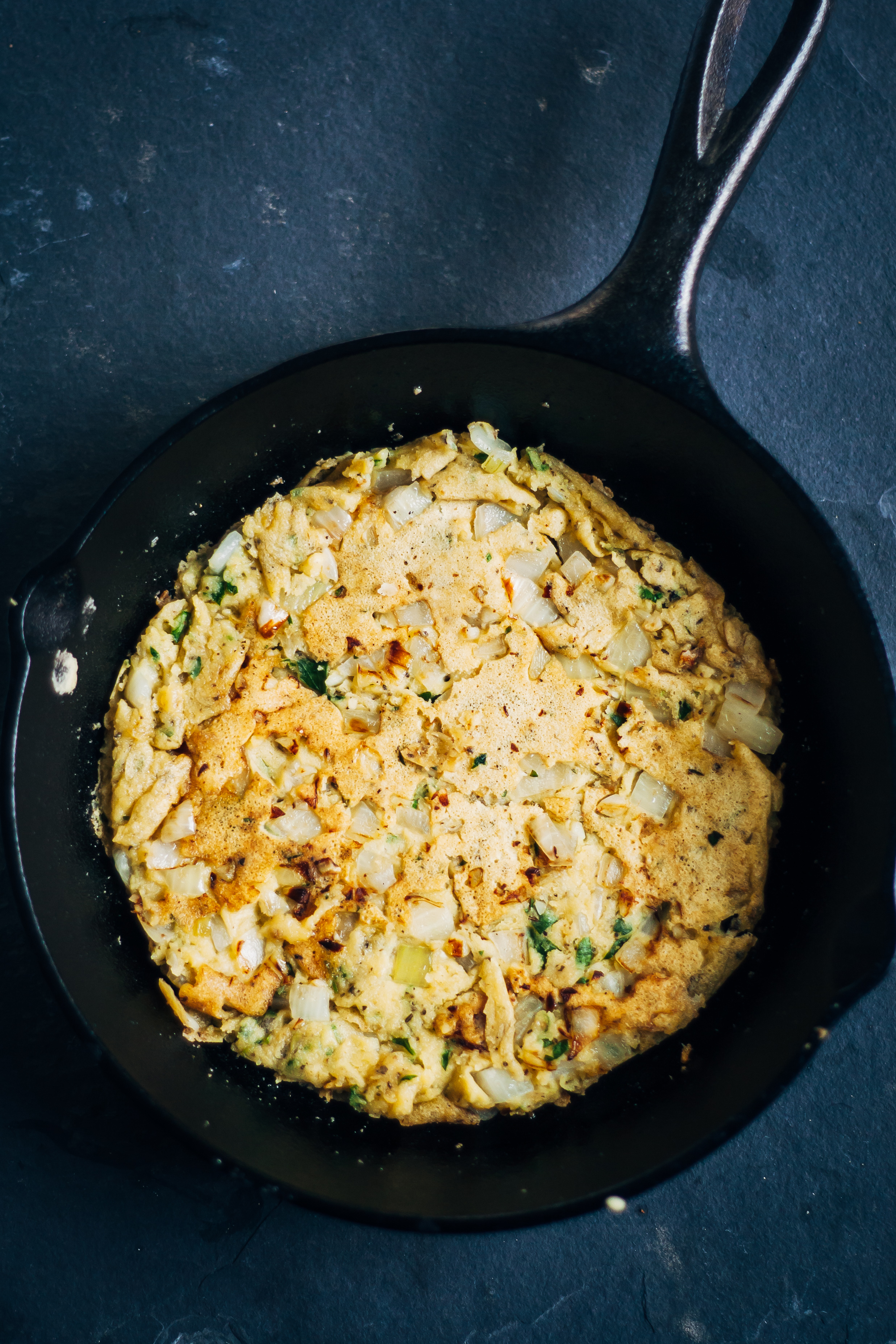 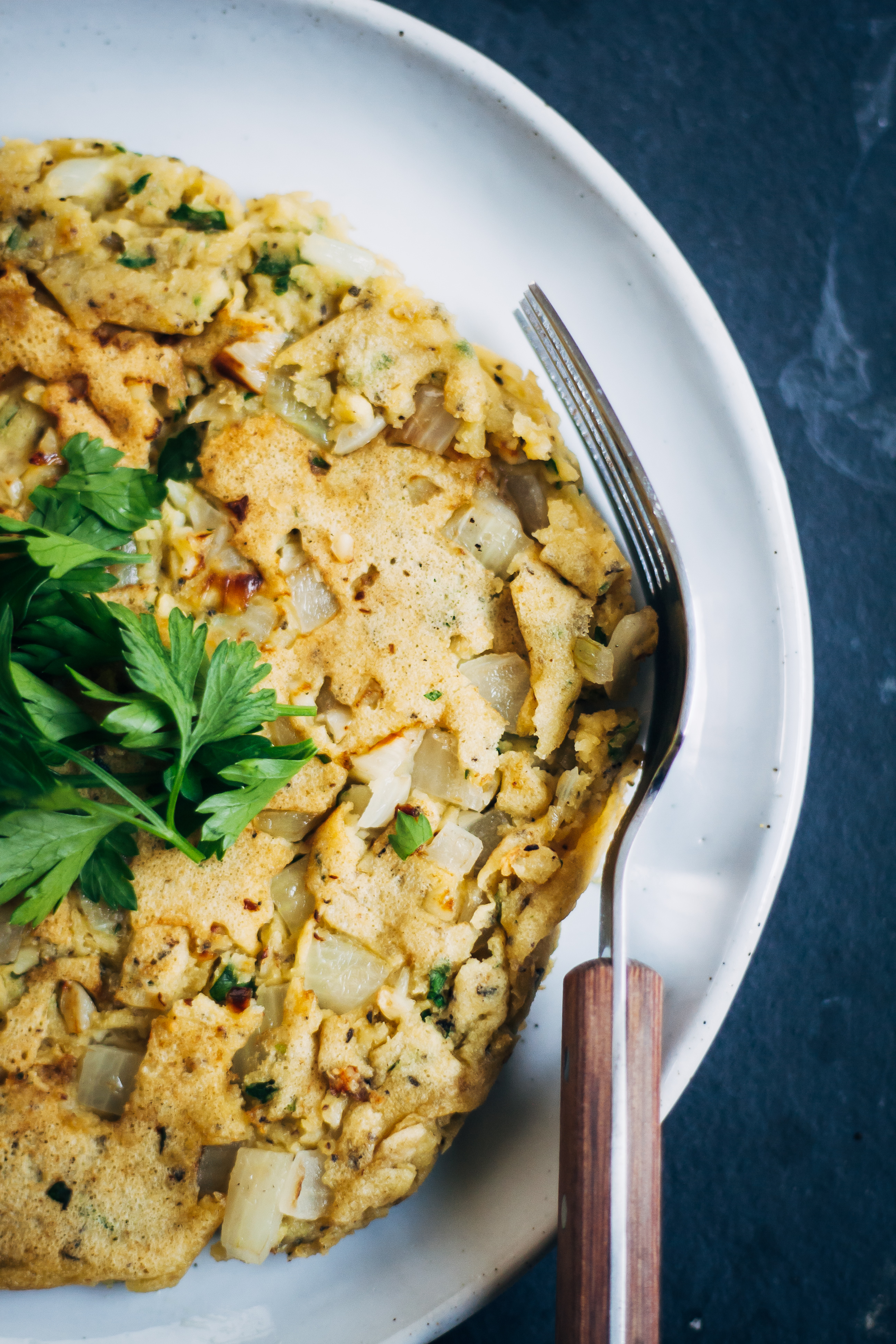 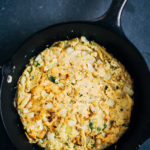 This socca is inspired by the south of France, made with sautéed vegetables and served with fresh herbs. A perfect dish for breakfast!
Prep Time 5 minutes
Cook Time 10 minutes
Total Time 15 minutes
Servings 2 -3 Socca

Socca is delicious on its own, but I like to serve mine with a little Cholula hot sauce. Pesto or chimichurri would be yummy as well! 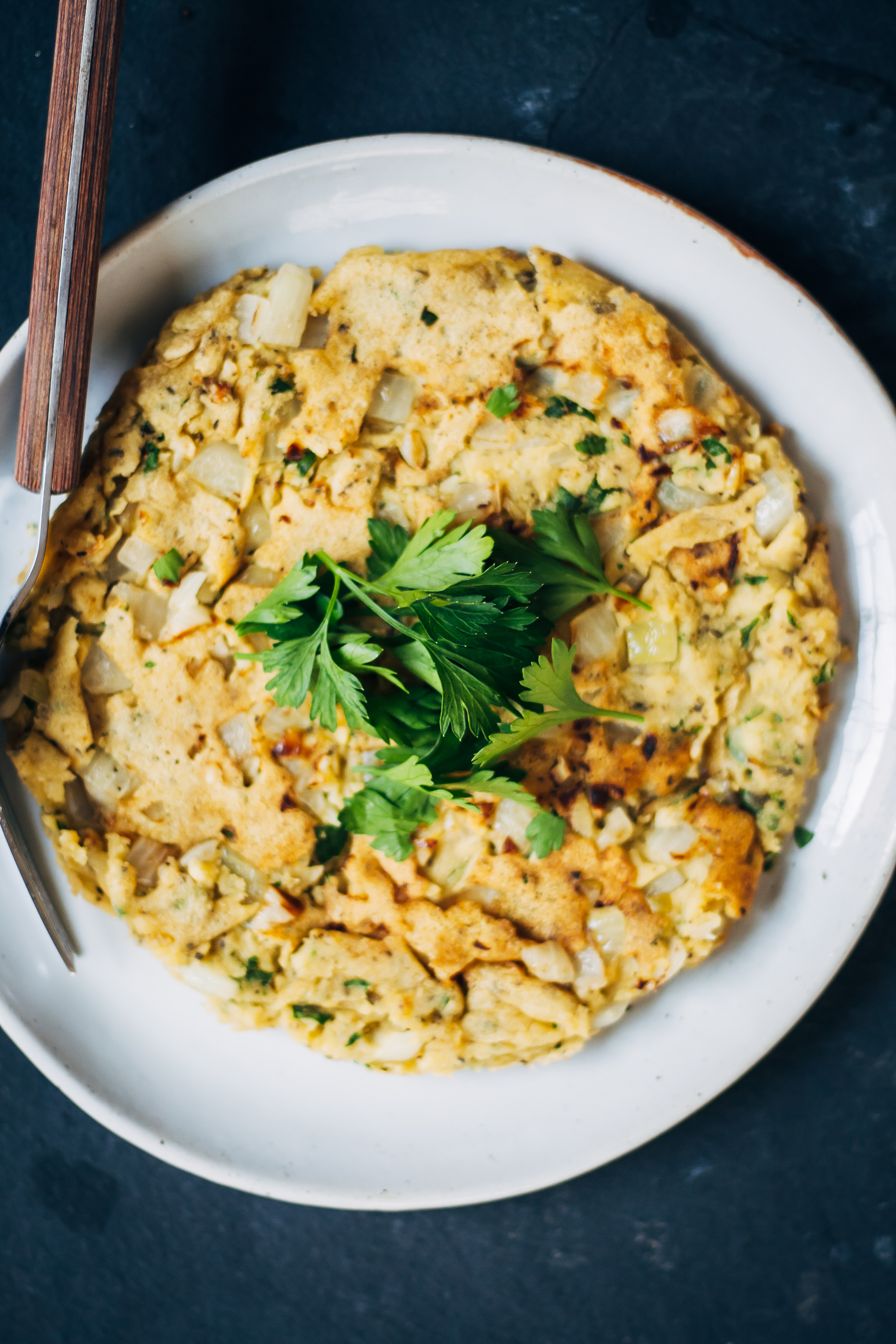 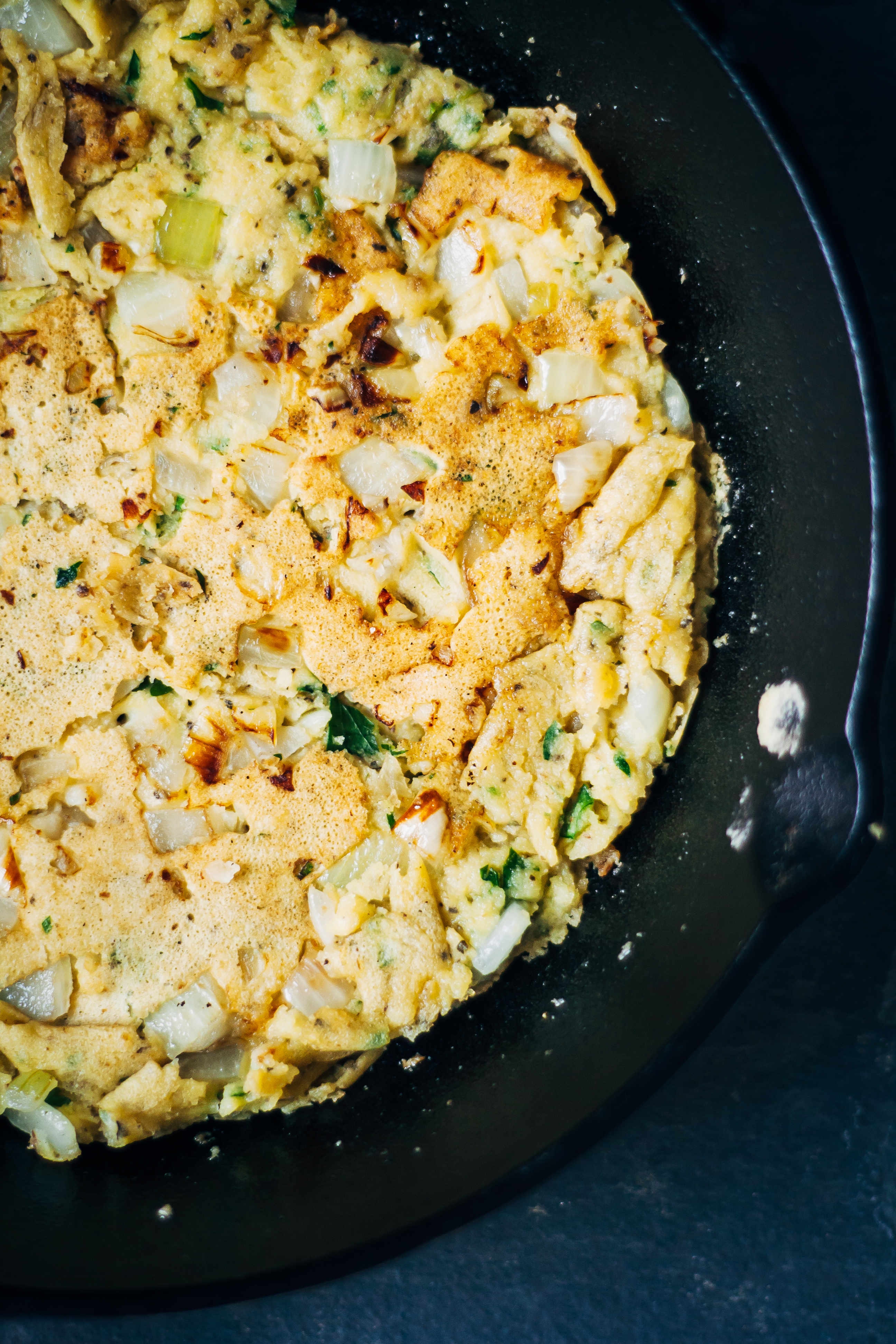 God Only Knows – The Beach Boys