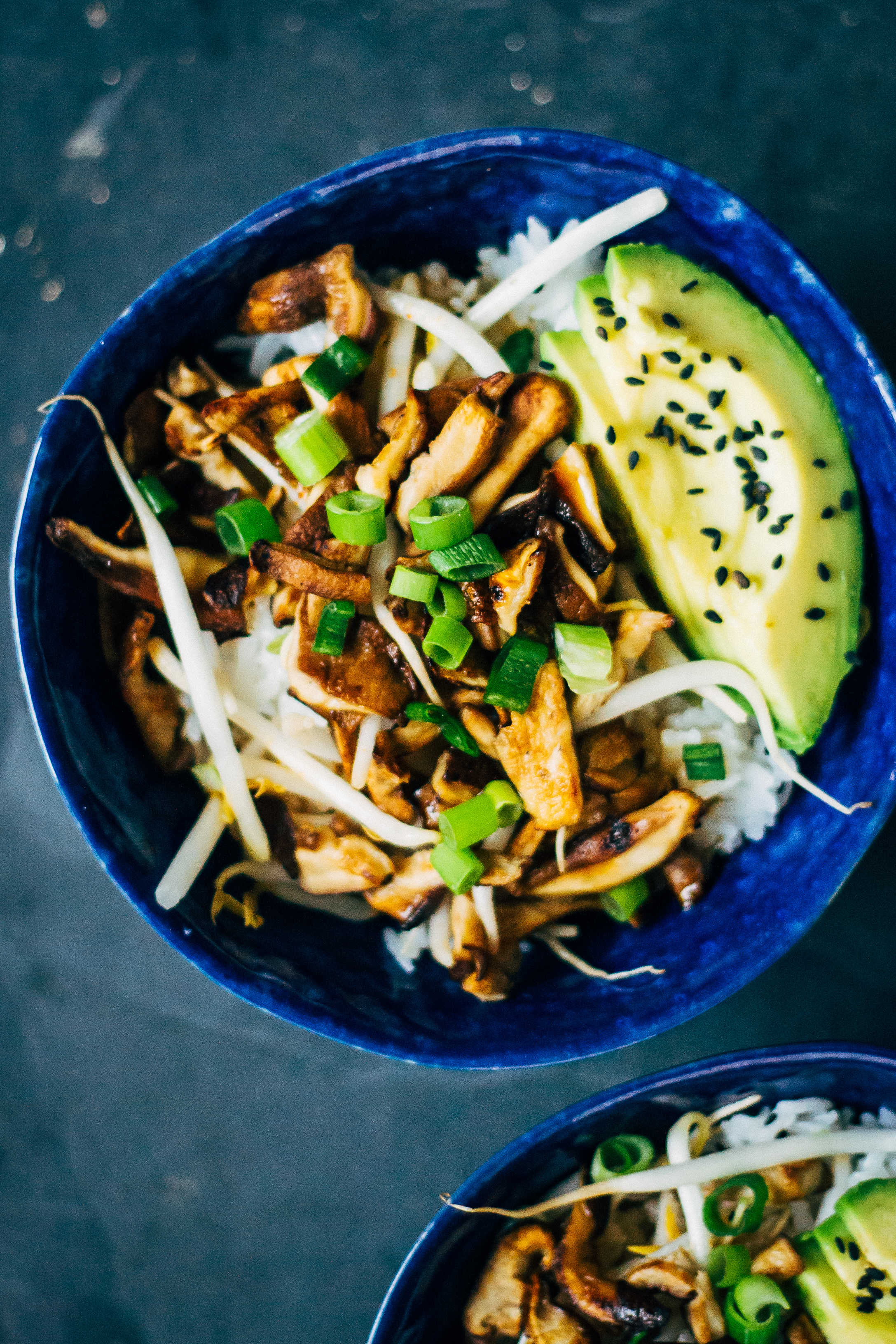 This Vegan Shiitake Donburi recipe is made with deliciously crispy mushrooms and a sweet and savory glaze!

Have I ever told you all about my obsession with Japan? I don’t think I have… but it’s about time. I think my love of Japan started with my uncle, who will be the first person to admit that he’s a huge nerd. He, like my father, went to a prestigious university for post-grad (Yale and Stanford, respectively), and has always possessed a love of learning. I don’t know where his interest in Japan started, but when I was growing up, he would always talk about his love of kudo and teach me how to properly hold my bowl of rice the Japanese way. We’d seek out restaurants that had tatami dining rooms, where we’d remove our shoes (in true Japanese tradition) and eat at a low zataku table, sitting on pillows. So when it came time to choose my summer camp when I was 8, I obviously chose Japanese camp!

There is something about the Japanese culture that is so mystical and beautiful to me. It speaks of ancient tradition and modern innovation; precision and order, sinuous design and exacting beauty. And then, of course, there’s the food.

Japanese cuisine lends itself very well to vegetarianism, and even veganism. As a relatively small yet populous island, the country simply does not have the land to devote to livestock. Traditionally, the Japanese diet consisted mainly of rice and sea food (including fish, shellfish, and seaweed). With the introduction of Buddhism, the consumption of meat was considered “taboo”, although its presence in Japanese cuisine did not disappear entirely. However, ingredients that are considered to be such staples in Western cuisine, like dairy, are not prevalent in Japanese dishes.

I loved Japanese food even before I went vegan, but now I find myself turning to those flavors more and more. Something unique about ubiquitous Japanese ingredients is that they often contain umami, which usually translates to “savory” but technically refers to the taste of glutamates on the palate. Unfortunately, these glutamates are usually found in meat and dairy products. However, many plant-based Japanese ingredients contain umami, such as miso, tamari, shiitake mushrooms, umeboshi plums, and certain types of seaweed, like nori or kombu.

Growing up, though, I just hated mushrooms. Does any kid like mushrooms?? Even now, I wouldn’t really say I “like” mushrooms. But I may just be coming around with this vegan shiitake donburi recipe – I must say, I did kind of surprise myself with the way these mushrooms turned out. I’m having a hard time finding the words to describe them… they were sautéed in sesame oil, giving just a hint of nutty flavor; and cooked until they were just browned, served over steaming rice, donburi style. The texture was not slimy like the mushrooms of my past, but slightly crispy on the edges and a little chewy on the inside. The flavor was full and mouthwatering and – dare I say it – meaty, but in a very plant-based way that was not off-putting at all. (I generally dislike meat substitutes, so I say this fairly objectively). I ate them all immediately after shooting the photos. And I may not be a full mushroom convert, but shiitakes certainly have a well-deserved place in my kitchen now. 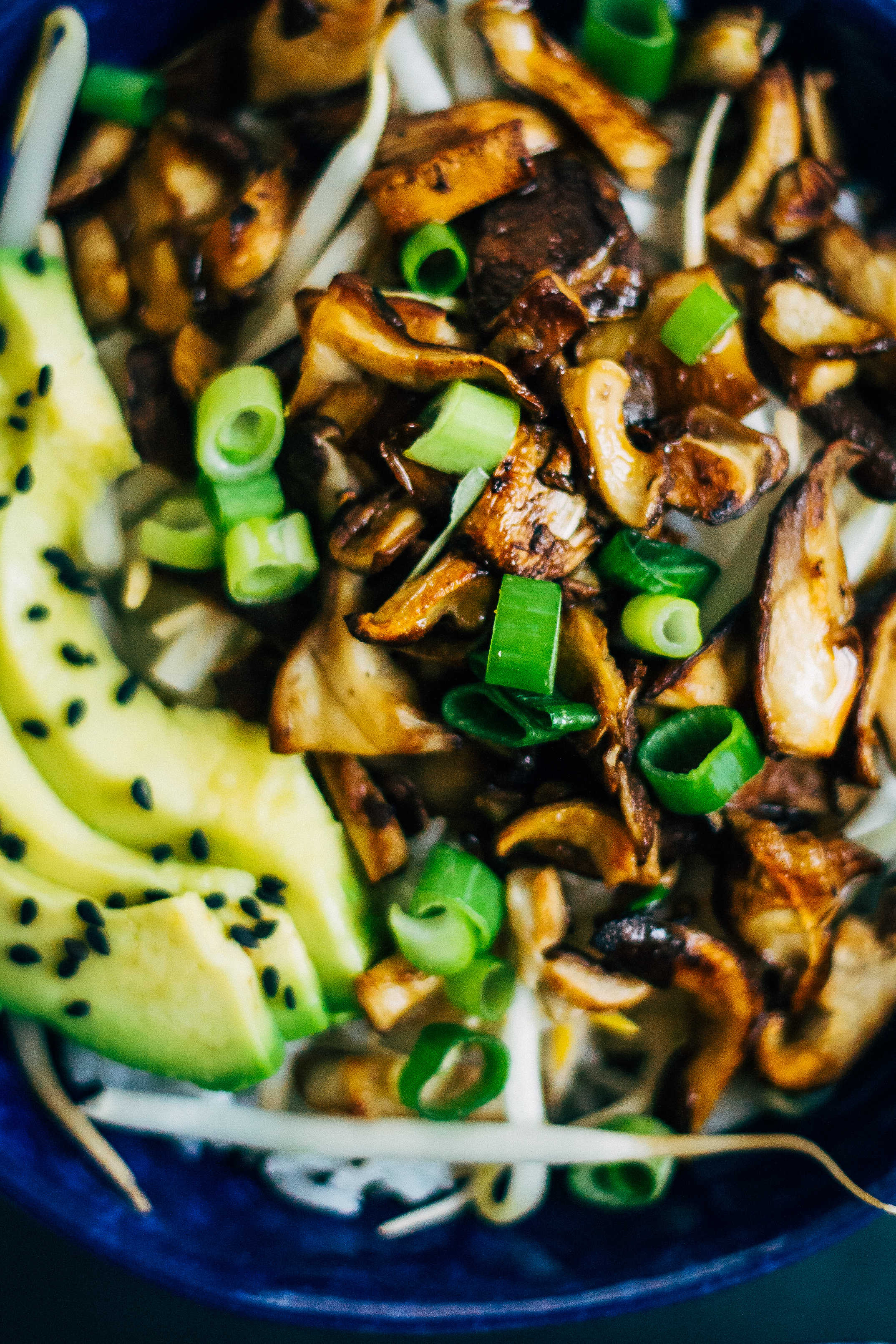 I rescued my own pup from a shelter in September 2013. To find a wonderful shelter dog near you, click here!